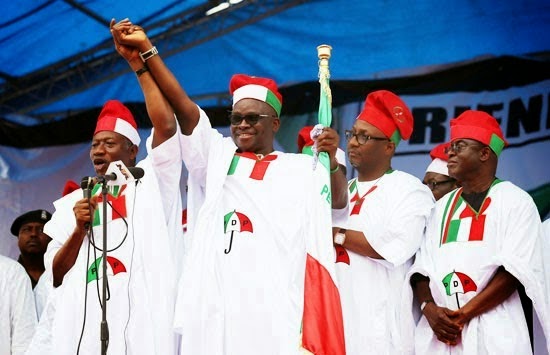 Feb 2nd, 2015 – Fayose: I Support Jonathan Reelection Bcos He Put Me Back As Ekiti State Governor

Governor Ayodele Fayose of Ekiti on Monday said his support for the re-election of President Goodluck Jonathan was in appreciation for the opportunity given him to serve the people of Ekiti state.

Fayose, who made this known during his campaign tour to Ikole in Ekiti, said it would be wrong on his part if he did not support the re-election of President Goodluck Jonathan.

“The overwhelming support I have been receiving from the people of Ekiti since my assumption of office has clearly shown that I was wrongly removed in 2006.

“You should show the support during the February elections by voting for the re-election of President Jonathan and other candidates under the umbrella of the Peoples Democratic Party (PDP).”

Fayose reiterated his commitment to the welfare of Ekiti people and pledged to always do what would alleviate poverty and improve their living standards.

Highlight of the occasion was the presentation of PDP flags to the party candidates for House of Assembly, House of Representative and the Senate seats from the area.