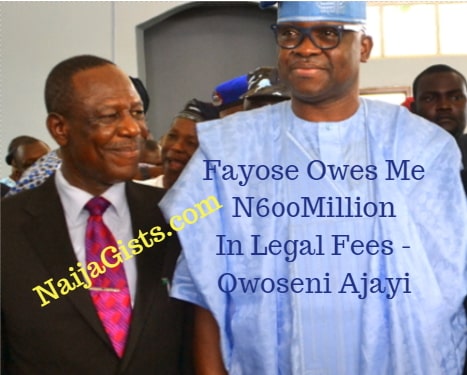 Ajayi, who was Fayose’s personal lawyer for many years before he was appointed Attorney General and Commissioner for Justice twice, listed thirteen high profile cases handled for the governor which had not been paid for.

In a letter he wrote to Fayose which was made available to newsmen in Ado-Ekiti on Wednesday, Ajayi said he made a moderate demand of a sum of N600 million at the rate of N50 million per each of the cases listed subject to accruable interest.

Ajayi said the cases were not handled free but were not paid for by Fayose because he was financially handicapped then noting that the governor is now buoyant enough to pay for the services rendered.

The cases include a defamation case: Ayo Fayose vs Independent Communications Network Limited with suit number HAD/8/2004 and the appeal case emanating from the same suit marked CA/AE/58/2010.

Federal Republic of Nigeria v Ayo Fayose with charge number FHC/C/179C/2006 which was a criminal case heard both in Lagos and Ado-Ekiti Federal High Courts until he (Fayose) was discharged and acquitted in October 2014 in which Ajayi appeared in all the cases.

Another case was Peter Ayodele Fayose vs Comptroller General of Prisons Suit Number: FHC/AK/CS/08/2008, which was about Fayose’s ‘controversial’ release from Ikoyi Prisons to face murder charge in Ekiti.

Other cases listed by Ajayi include Peter Ayodele Fayose vs EFCC appeal marked CA/I/144/2011, Peter Ayodele Fayose v the State marked HAD/16/2007 to stop his arraignment for murder by the Segun Oni administration, the appeal case that arose from it marked CA/14C14/2007 and the Supreme Court that emanated from it still pending marked SC449/2011.

The last case mentioned by Ajayi, who is also a former Chairman of Nigerian Bar Association (NBA), Ado-Ekiti Branch, was E-Eleven v Peter Ayodele Fayose and 2 Ors filed to frustrate his swearing-in to office after winning the 2014 governorship election.

“You will recall that you never paid our chamber, Owoseni Ajayi & Associates for the services rendered throughout the time because of your financial incapacitation despite numerous demands because you were already out of office at the material time.

“It should be stressed that we never acted free because we are legal practitioners working for our legal fee nor offered you “pro bono” service because you were not a pauper to be qualified for such a service.

“We merely showed understanding up till now because of the prevalent circumstances verily known to you. And now that you have served another term as Governor of Ekiti State, you are financially strong enough to pay the said sum as demanded.

“Sir, you will agree with us that a labourer deserves his wages. We thank you for your patronage and we also deserve commendation for having discharged our professional responsibility with diligence and without compromise.

“And also for saving Your Excellency from several legal embarrassments.”