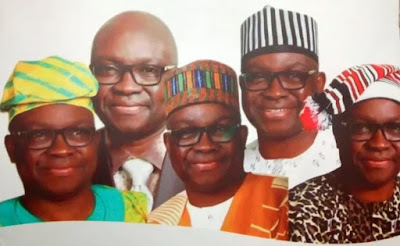 Ekiti chapter of the ruling party, APC has criticised Governor Ayo Fayose for declaring his intention to contest the 2019 presidential election while he is owing workers in the state salaries and allowances ranging from six to eight months.

The party described the governor’s action as the height of insensitivity to the people’s plight and an “irresponsible conduct to behave as if Ekiti State treasury is a personal estate for private comfort.”

In a statement issued in Ado-Ekiti by the Publicity Secretary of APC, Taiwo Olatunbosun, the party flayed the governor for “being blind to the sufferings of workers while pursuing self-promoting presidential ambition.”

He said it was unconscionable for the governor to keep deceiving workers on the state’s poor finances to endure suffering while he enjoyed full life with his family and pursue mundane fancies without sparing a thought for the sufferings of the people.

Olatunbosun said: “It is the height of wickedness for Fayose to always call teachers to meetings like he did this week to brainwash them on the state’s poor finances and later give them N1,500 pittance for transport until the next brainwashing session with these teachers on empty stomachs while he enjoys full life misapplying state’s money for his fancies.

“This is more condemnable against the backdrop of facts available to Ekiti people that Fayose has been awarding contracts at over-bloated costs to his friends outside Ekiti State, contrary to his promise to patronise indigenous contractors during his campaigns.

He contended that the money the state had collected since the governor assumed office was enough to make the people happy if he had applied the money honestly and transparently, adding that Thursday’s declaration of his presidential ambition was meant to distract the people from alleged funds mismanagement in pursuit of a selfish ambition.

“We urge the EFCC to be meticulous in their investigation into how the governor misapplied bailout of N20b, CBN’s N2b loan for small-scale enterprises, N10b loan for projects, N2.8b UBEC/Subeb counterpart fund (which was not matched by the state government), monthly allocation from the Federation Account to Local government councils and Paris Club cash that he has diverted to his ill-motivated projects for selfish motives while Ekiti people go to bed on empty stomachs.”

Nigerian Senate Approves Death Sentence For Kidnappers & 30 Years Jail Term For Accomplices
Nnamdi Kanu Was Not Kidnapped By Soldiers, He’s Not In Our Custody- Defence Headquarter