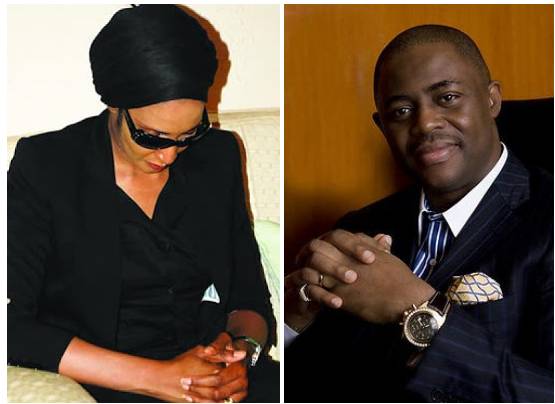 In response to a legal threat from Bianca Ojukwu‘s camp, hear what FFK said via his publicist:

“We really do wonder what Mrs. Ojukwu really wants from Chief Fani-Kayode and what her agenda really is?

“This is sad and unfortunate and it is beyond the imagination of anyone that a serving Ambassador of the Federal Republic of Nigeria would so readily and so easily be given to telling such lies.

“Chief Fani-Kayode is not comfortable with publicly joining issues with ladies when it comes to matters of a private nature such as this because he was well brought up and he is a gentleman but it is clear that Bianca Ojukwu is desperate to go to war over this issue and to cover up the truth about their past,” said Mr. Fani-Kayode.

“It is also clear that she has constituted herself into the arrowhead of a group of people that are determined to use her and this whole unsavoury episode to attempt to distract attention from the wider and more important issues raised in the essay and to discredit him.
“Since that is the case we welcome whatever action Ojukwu wishes to take in court and we shall gladly meet her there.

“We will also be instigating our own legal proceedings against her in due course for her barefaced and malicious lies and her consistent claim that she has never met Chief Fani-Kayode all in an attempt to libel, defame, diminish and discredit him before the entire world,”

“The precise nature of that relationship will be explored and exposed in open court,” Mr. Fani-Kayode said.
“It is not in the nature of Chief Fani-Kayode to fight unnecessary and distractive battles over flippant matters such as this but on this occasion he has been compelled to do so simply because he will do whatever it takes to protect his integrity and establish the fact that he has told no lie.

“Since she has continued her shameless perfidy and wishes to tread the path of deceit and confrontation then so be it.

“Finally let it be clearly understood that at no point did Chief Fani-Kayode lie about the nature of his relationship with Ojukwu. However he did not feel that it was appropriate or necessary to share the details of that relationship with the public because he felt that such matters were strictly private.

“The fact that she mistook his mature exercise of restraint and discretion, even when provoked and insulted, his desire for peace and his gentlemanly nature for weakness is not only unfortunate but also a grave miscalculation on her part.

Once again we reiterate the fact that we counsel Ojukwu to take whatever course of action she pleases and we welcome this opportunity to expose her for what she is.The matter has been referred to our lawyers for final preparation. They will prepare a vigorous defence to Ojukwu’s absurd allegations and they will also determine our next line of action against her,”