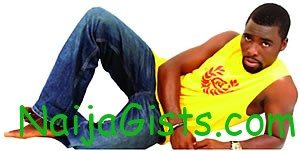 The attack took place on Friday at around 8pm. After sighting him, the pirates thought he is coming to confront they so they launched the first attack.

Below is what the actor told NollywoodReel on the phone few hours after the attack;

“ I was on my way to an event. Because my partner couldn’t see me, I parked my car and crossed the road on foot to call him where he was standing and suddenly, some guys just pounced on me. While beating me, they said I had the guts to arrest them for selling pirated movies. I cried that I wasn’t after them, but they continued to beat me mercilessly.

“It took the prompt intervention some mobile policemen on duty at Iyana-Ipaja to rescue me, they would have lynched me. It took some minutes before I regained consciousness after the beating.”

Nawa for Naija o, which kind of injustice is this? All these boys must be dealty with