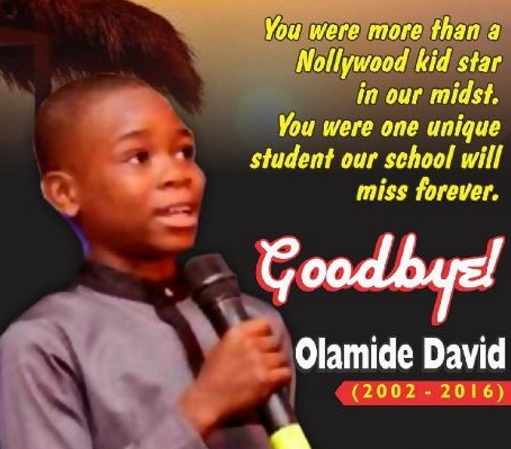 On a post on social media on Valen­tine’s Day, Foluke had stated the follow­ing “Tomorrow, 15th of February, is my birthday and traditional wedding anniver­sary. My husband and I will like to use the occasion to celebrate our adopted son, late Olamide David, who died last month. Before his death, he was 2014 Best Kid Actor for Best of Nollywood Awards (BON).

“He was also nominated for Best Kid Actor in Africa in 2013 among three oth­ers. Before his death, he had done several movies and soap operas to his effort and credit.”

The couple celebrated late Olamide’s life and times with students from about 10 secondary schools across Lagos. Olamide was the first actor to die in 2015. He suc­cumbed to the cold hands of death after he sustained injuries while playing football.