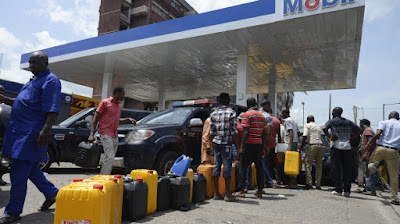 Several filling stations in Badagry town of Lagos State are selling petrol between N180 to N210 per litre, the NAN reports.

NAN correspondent, who went visited many petrol stations in the town, observed that they were under lock and key, however four stations were seen selling fuel on Tuesday.

The same scenario played out at Seme Border area as most petrol stations were closed and the few were selling as high as N230 per litre.

As a result of the scarcity, commercial vehicles in Badagry and Seme areas were not available for passengers and the few available increased their fares by 100 per cent.

A motorist, Dayo Adekoya, lamented the situation and urged government to find a lasting solution to the problem of fuel scarcity.

“This recurrent scarcity should come to an end once and for all, because this situation is bad and worrisome.

“The government should find a lasting solution to this particular issue because we can’t keep on going this way every time,’’ he said.

Mr Joseph Ekundayo, a resident said that the current situation had brought hardship to his family.

“You cannot imagine the suffering we have being going through because of the present situation.

“There have been constant power failures coupled with no fuel to power our generator and the heat is unbearable.

“Things must change in this country because we can’t keep on going like this,’’ he said.

Another resident, Mrs Sarah Hungba, urged the officials of Department of Petroleum Resources to check the activities of filling stations in the area.

“The officials need to come here and check the practices of fuel stations and seal them because most of them are just taking advantage of the situation,’’ she said.

A petrol station manager at Ikoga area of Badagry, who pleaded anonymity, told NAN that he bought his fuel for N170 per litre at the depot.

“I bought the fuel for N170 per litre at the depot, so it is ideal for me to sell at N200 per litre so I can make profit because that’s the essence of business,’’ he said.