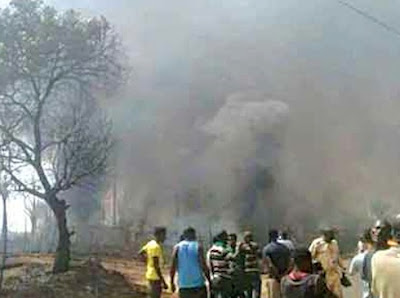 A welding gas explosion in Damaturu on Wednesday killed one person and caused panic, making people scamper for safety.

Lt. George Okupe, the Army spokesman in the state, confirmed the incident to NAN.

“It was an accidental explosion from a welding tank when a welder was working on a pipe for a soldier.
“The welder died instantly while the soldier and one other civilian sustained injuries and are responding to treatment at the Specialists Hospital Damaturu,” Okupe said.

The Army spokesman said the situation had been brought under control but that investigation was ongoing.
He urged the people not to panic but to go about their normal businesses.

Okupe solicited the support and cooperation of the people, saying “the fight against insurgency is still on and requires collective responsibility”.

Normalcy has since returned to the town as people go about their normal activities.