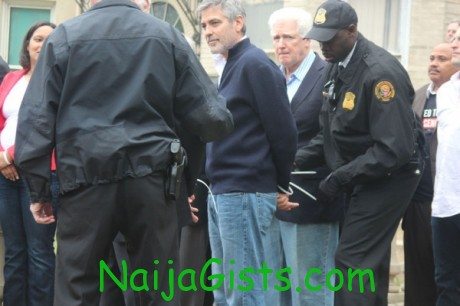 Top Hollywood actor, George Clooney and dad were arrested at the Sudanese Embassy in Washington DC few hours back during a planned protest.

Others that were arrested includes;

This arrest came after being warned 3 times not to cross a police line outside the embassy.

They were seen handcuffed and placed in a U.S Secret Service van.

The actor, along with protesters who held signs that read; ‘Sudan: Stop Weapons of Mass Starvation’, had accused Sudan’s president, Omar al-Bashir, of deliberately blocking food supplies and medical aid from entering the Nuba Mountains, a border region it shares with South Sudan, prompting a humanitarian crisis. 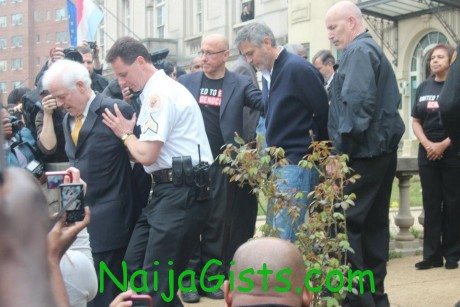 The 50-year-old Oscar Award winner had stated that he hoped to draw attention to the issue and is particularly impressed with President Obama’s personal engagement on it. The actor also hinted at dire consequences if the matter was not proactively tackled, stating that in the next three or four months ‘we’re going to have a real humanitarian disaster.