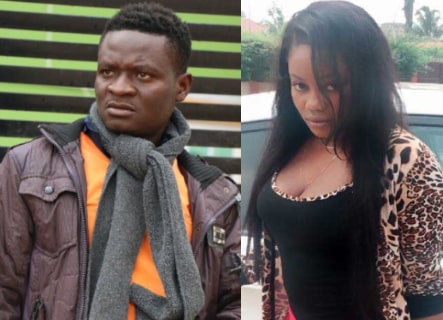 A budding Ghanaian actress has been exposed for allegedly sending a nude video to a movie producer and director, for a movie role.

Her daring move however backfired as the producer’s wife reportedly got a hint of the nude video and exposed the lady.

In the video, which was shared by Ghpage on Instagram, a lady is seen lying half-naked with her hand covering her bare chest and rolling on a bed.

According to the wife of producer and director Francis Dzogbetsi who is popularly known as ‘Nebu Ur’ Majesty’ the upcoming actress sent nude videos and photos of herself to entice her husband.
Her motive was to get ‘Nebu Ur’ Majesty’ to cast her in a movie in her attempt to enter mainstream acting.

“The movie industry is collapsed all because of our foolishness and stupidity. How can a woman send her nakedness to my husband all because of a role?
What a shameful lady. This lady Elizabeth Gyabi or Queen Lissa, whatever you call yourself, this is the warning to you fool. Don’t ever send or chat with my man again in your forking life prostitute in the industry. ASHAWO…”