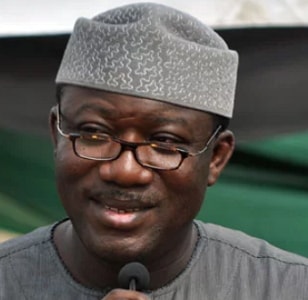 “God Has Delivered Ekiti State From Slavery, I Will Restore Her Values”- Governor Elect Fayemi

Ekiti state Governor-elect Kayode Fayemi said God had liberated the state from slavery with his victory.

Fayemi was accompanied by his wife, Bisi, the deputy governor-elect, Chief Bisi Egbeyemi;

A huge party was held in Fayemi’s Isan-Ekiti hometown on Saturday when it became clear that he was coasting home to victory.

Fayemi’s arrival at the party secretariat created a huge lockdown on Ikere Road along Ajilosun area of the city.

Addressing a news conference at the party secretariat, Fayemi urged Peoples Democratic Party (PDP) candidate Kolapo Olusola and Governor Ayo Fayose, to emulate him (Fayemi) by conceding defeat the way he did after losing the 2014 election.

“Let them behave the way we behaved in 2014; we should all know that in an election of this nature, you can only have one governor at a time.

“We conceded in 2014 and our counterparts on the other side should accept defeat for peace to reign in Ekiti State and they should refrain from violence for Ekiti to enjoy peace,” he said.

Fayemi explained that the people of Ekiti State, especially government workers and pensioners, need immediate succor from the suffering they are going through. He promised to initiate the process of easing the pain of offsetting unpaid arrears in collaboration with the outgoing government.

The governor-elect promised to set up a Transition Committee to liaise with the outgoing government to facilitate smooth transfer of power on October 16.

Fayemi said: “As we look forward to the inauguration of the new APC administration on Tuesday, October 16, 2018, I offer my assurances that we will not wait till then to bring immediate succor to you.

“We will proactively explore all avenues within the limits of the law, especially through the Transition Committee to be set up very soon, to ensure the outgoing administration prioritize the payment of the backlog of salaries to all categories of workers and pensioners.”

Calling for unity after a bitter struggle for the governorship seat among all parties and co-contestants, Fayemi urged them to remember the bond of unity as Ekiti people.

He said: “The very nature of elections are divisive as we cannot all see things from the same perspective, nether can we all have some preference for political parties and candidates.

“However, regardless of how we voted yesterday (Saturday), I encourage us all to accept the results in true democratic spirit and commence the journey to reuniting our state.

“Despite the divisive nature of the contest, I want you to remember our bond of unity as Ekiti people. I, Dr. John Kayode Fayemi, hereby offer myself to be governor of all irrespective of faith, creed or political belief.”

He promised to restore good governance, values and ethos Ekitis are renowned for noting that bad governance, brigandage and abuse of power will become a thing of the past.

He described his victory as one “for reclaiming the land and restoring Ekiti values”.

Speaking to reporters in his hometown Isan-Ekiti shortly after he was declared the winner, Fayemi said: “The victory of this election, I believe, is for reclaiming the land and restoring the values of our people.

“Our values in Ekiti are respect for our leaders, commitment to our people, non brigandage nor criminality and so on.

He added: “This was just not an Ekiti election. I want people to understand that this election has a lot of significance to the future of democracy in Nigeria.

“The fact that we have witnessed a free, fair and transparent election process has huge importance for similar exercises, like Osun State next door to us and eventually the national elections in February 2019.”

The former Minister of Mines and Steel Development and APC candidate was declared winner at 7.49am by Chief Returning Officer and University of Ibadan (UI) Vice Chancellor Prof. Idowu Olayinka.

Continue Reading
You may also like...
Related Topics:election, Fayemi