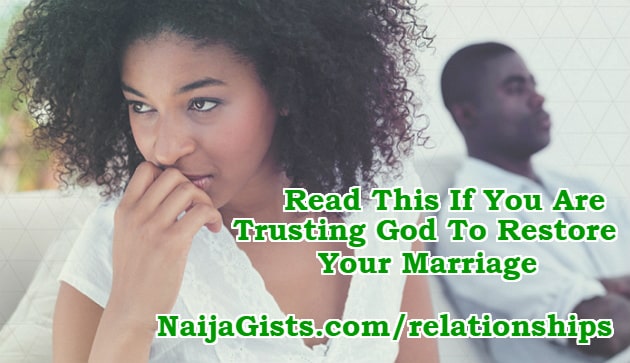 God’s Will For Marriage Restoration After Divorce: Read This If You’re Trusting God To Restore Your Marriage

There is no doubt that God’s perfect will for every marriage is for it to last till death. This underscores the sacredness of the marital vows taken once the marriage is contracted. This serves as a bond, a sort of chord that binds the couple (spiritually) till death parts them.

However, when issues arise and couples feel like their marriage is irreparable, they seek for a divorce. Seeking for one does not mean the vows have been severed. Therefore, in the eyes of the God, they are still man and wife.

The society in recent times seems very complacent on the issue of divorce and this has invariably led to its uninhibited increase.

This is in no way the plan of God for marriage. Even when couples divorce, it is still the will of God that they would still come together and have their marriage restored.

There are some scripture verses to back this up: 1 Corinthians 10: 11:

“and unto the married I command, yet not I but the Lord, let not the wife depart from her husband. But and if she departs, let her remain unmarried or be reconciled to her husband and let not the husband put away his wife. “

God desires every marriage to be restored to its original state and yes, this is possible. Bearing this in mind, the following steps should be applied by the willing couple (s):

Prayerfully Follow It Through: No restoration comes easy least of all, marriage restoration. It requires a great deal of prayer and commitment to see it through. Usually, after a marriage has been annulled, it takes some time (usually years) to get it right.

Leveraging on the efficacy of prayers, the couple who wish to have their marriage back must cry unto God in all seriousness.

Work on Past Experiences and Mistakes: Every marriage has its own ups and downs and one thing or the other must have caused the divorce. Work on your faults so that when reconciliation takes place, it would be for the best.

This part is of utmost importance because just as the Bible instructs, you cannot pour new wine into old bottles and vice-versa.

If you ever feel yourself sinking into despair, remember these testimonies as a boost to your spirit:

A lady in South Africa had been divorced for over six years. When she realized her mistakes, she began to pray for God’s restoration with her ex husband. It was not until another year and half that her ex husband, smitten by the Holy Spirit sought for a reunion. Today, they are married and even have a child in addition to the others.

Another instance is of a man in Western Nigeria who after a divorce had stayed for two years and was already contemplating a remarriage. During this period, his ex wife too had moved on and was with someone else. When he realized his mistakes, he sought for help from God and pray ceaselessly. He then tried reaching out to her but it was hopeless. She had already gone deep in her relationship with the new person.

This did not deter him but only intensified his resolve to win back his wife through prayers. His perseverance and tenacity finally paid off because things soon went sour in his ex wife’s relationship and in no time, they were back again as husband and wife.

There are lots of instances of people who through God’s intervention had their marriages restored. Therefore, when all hope is lost, turn to Him for guidance and he will see you through.

On your own part, there are certain pitfalls to avoid while waiting  on God to restore your marriage. They include the following:

Avoid Negative Associations: These are people who would try to discourage you. They could be friends, family members and or colleagues. Their aim is to talk you out of the right path and may go as far as introducing you to their friends for dating and if possible, a remarriage.

Avoid Negative Mindset: You need to avoid a negative mindset at all times especially in this period. Do away with any negative emotions and guilds that may still be tugging at your heart. The moment you begin to nurse and accommodate negative thoughts, you have lost the fight.

Desperation: Desperation is a recipe for disaster. You must bear in mind that this would require a great deal of time  and patience so desperation should have no place. Keep your cool and do not let your emotions get the better of you.

Involving the Children (if any): This is not the right time to use the children as a  bait to have things your way. Do not get them involved in the process. Children ought to be shielded from such exposure.

Avoid Spreading the News: At this period people are likely to telling their friends or people around in order to solicit for advice. It is a good thing to share a problem. However, you must be very sure of the people you share this matter with.

Remember, some people may be happy with what happened and would only seek for ways to thwart your plans at reconciliation. It is always advised to speak to your spiritual leader and possibly one or two family members. The message: keep the people you tell as few as possible.

Above all, involve God in every step of the reconciliation process, and watch your marriage resuscitated.

6 Healthy Ways To Let Go Of Your Ex And Move On!!
Marriage Crisis Triggers Every Couple Must Watch Out For