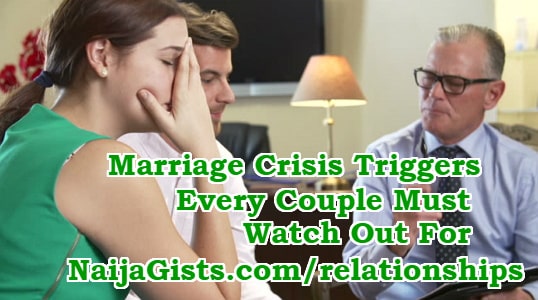 Many marriages are in crisis today because of the presence or interference of third parties. An otherwise happy union between two legitimate parties, husband and wife, becomes embroiled in turmoil because of the intrusion of an in-law, friend, neighbour, domestic servants, ex-lover, colleague, pastor or landlord, etc. In many homes, the househelp or maid is usually the most common third party present. They and the mother-in-law are the main marriage crisis triggers.

Marriage is the only form of enterprise that does not admit a permanent third party at any stage, except domestic servants, otherwise it is doomed to fail. The only exception to this rule is when the marriage is in crisis because of a quarrel that the couple cannot resolve by themselves. It becomes imperative for a third party to come in and mediate and depart when the job is done. However, a post-conflict resolution follow-up visit by the mediator is not out of order, but that’s as far as it should go for a third party involvement in this case. Ordinarily, third party involvement in marriage is inevitable in most African societies because of our culture. Close social interaction between families in a marriage is quite normal and legitimate. It is the behavior of all those involved that determines whether such interactions are desirable or not.

A mother-in-law would normally visit to assist her daughter with the nurturing of her newborn baby in her husband’s home, especially during the early days of childbirth. Most sons-in-law welcome this timely intervention because their wives, as new nursing mothers, need all the experience of their own mothers to help nurture the new born baby at this crucial stage. Trouble is, when the visiting in-law is the husband’s mother, the home tends to be enveloped in tension because of petty jealousies.

A mother-in-law is best advised not to cohabit with her son or daughter-in-law. If they must visit, it should be for a short period. There the honour lies. Where an in-law overstays their welcome, they end up being caught in the web of domestic conflict which could have dire consequences for their ward’s marriage. An in-law should be a stabilizing force, not the cause of marital conflict.

Any third party involvement in relationships tends to create tension, more so, in a marriage which is supposed to be the union of loving couple. A visit by in-law from both sides is sometimes inevitable because family events could bring such about. However, mothers who visit should know when to leave; otherwise they’ve set the stage for domestic upheaval, which invariably tears marriages apart.

In some cultures, in-laws send their wards to live with their son-in-law, with the additional expectation that he would train siblings of the wife, and also take responsibility for welfare issues in her extended family. Not all husbands can meet these unwritten expectations and where they do, relatives of the husband sometimes send their own wards to their son to train, but since resources are always limited, the husband is unduly stretched. This may strain inter-family relationships.

I think the basis of a good marital foundation is to have a prenuptial understanding of how in-laws should be accommodated in a marriage in these modern times. Cultural factors that tend to give in-laws strong presence in a marriage are gradually becoming archaic, largely because the economic fortunes of couples now determine the helping hand they can extend to third parties, regardless of social norms.

It is obvious that the challenges of maintaining domestic servants, likes maids, drivers, etc. are daunting enough. To compel a struggling couple to add the responsibilities of funding extended family members is overreaching, to say the least. Of course, we cannot deny the reality of the relevance of the extended family system as a safety net in African societies, its impact, nonetheless weighs against the fortunes of young couples.

After in-laws, the other third parties are domestic personnel, especially the maid. Some of these girls or ladies are demon-possessed. This is no superstition or myth because I write from experience. Some maids turn into husband-snatchers or seducers. They lure husbands into illicit affairs and sex, instead of performing the duties they are paid for; they indulge in gossip, and other untoward behaviours.

Couples must be wary of drivers, secretaries and husband’s female personal assistants. These folks should never be given an inroad into your marriage. Many of them are marriage-wreckers. The thing to note is this, don’t discuss your spouse with these people. In fact, keep all third parties out of your relationship with your spouse. Third parties can’t love you more than your spouse. All third parties are to be kept at bay; most hardly mean well.

Next week, I will discuss other third parties like friends, colleagues, neighbours, and pastors/prophets. Managing third parties is the great inevitable in any conjugal relationship. You need some skills to handle them. I believe intending couples should take time to read books on marriage, friendships and other relationships before they say “I do”.

About the author: Ladi Ayodeji is an author, rights activist, pastor and life coach. He can be reached on 09059243004 (SMS and WhatsApp only)

God’s Will For Marriage Restoration After Divorce: Read This If You’re Trusting God To Restore Your Marriage
Man Who Got Side Chick Pregnant In Dilemma As He Plans To Propose To Girlfriend On Birthday