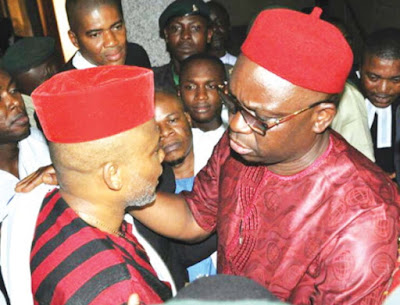 The Ekiti State Chapter of the APC party has accused Governor Ayo Fayose of giving financial and logistics support to Indigenous People of Biafra (IPOB) and its leader, Nnamdi Kanu.

The party urged the nation’s security agencies and the International Police (INTERPOL) to investigate the governor’s alleged support for IPOB, which the Nigerian military high command just declared a terrorist organisation following the seizure of weapons by the Nigeria Customs Service (NCS) suspected to belong to the group.

In a statement yesterday by its Publicity Secretary, Taiwo Olatunbosun, Ekiti APC said Fayose “demonstrated the seriousness of his support for the collapse of Nigeria” when the governor released his telephone number and email address on April 27 to those interested in the Biafra cause to contact him.

According to Olatunbosun, the telephone number and the email address Fayose released to the public for identifying with the Biafra struggle are: 070300000393 and email: mystory2006@yahoo.com.

He described the governor’s action as a “treasonable act”.

The party’s spokesman said the governor’s lawyer’s statement at the weekend calling for dialogue to resolve the Biafran crisis is an afterthought.

He said the Army was only performing its constitutional role of preserving the nation’s unity and bringing secessionists and their backers to justice.

“On April 26 and as published by The Nigerian Tribune and its Tribuneonline publication on April 27, Fayose said he was working in conjunction with Deputy Senate President Ike Ekweremadu to raise funds for Kanu, stressing that he was taking his support for Kanu beyond showing solidarity in court by raising funds that would be deposited in an account opened in Kanu’s name.”

He led a campaign to the Chinese Embassy in Abuja and later to Beijing, the Chinese capital, to urge the Chinese government not to help Nigeria out of recession.

“Relentlessly, he led hate campaigns against the symbol of the Nigerian authority, President Muhammadu Buhari, wishing him dead, including hounding and haunting the President across the world, on his sick bed and threatening to expose the President on a life-support machine. All these were in spite of (Fayose) swearing to uphold the Constitution of Nigeria and to be loyal to the Nigerian state and its President.

“As reported in the media on May 25, he said: ‘Ekiti State is now part of Biafra’, which drew the ire of several Yoruba groups…”

Olatunbosun also quoted Fayose as saying: “We are just driving the cause. As soon as we receive his account details, we will be made available. People have the right to agitate for independence. Even in traditional institution, people agitate for autonomy.

He added: “All the Southeast governors, including Ekweremadu, have opposed Kanu in his secessionist activities while Governor Nyesom Wike of Rivers State has warned him and IPOB to stay away from Rivers. But Fayose declared Ekiti State as part of Biafra. This has confirmed the report that he is part of Biafra’s financiers as he had publicly declared to the media.

“No wonder, just four months after Fayose started mobilising funds for Biafra, thousands of deadly weapons, including military assault rifles, were smuggled into the country but were intercepted by Customs. It was also discovered that uniformed Biafran militants already have military training camps where they are planning deadly assaults on Nigeria after threatening its leaders.

“We had earlier alerted security agencies to the presence of armed gangs and stockpiling of arms in the Ekiti State Government House. Fayose’s present activities at raising funds for Kanu confirm that he is part of a rebellion against the Nigerian state.

“We have always insisted that Fayose is a threat to Nigeria’s unity and the economic survival of its people.”

Olatunbosun added: “His support for Kanu in funds mobilisation for his treasonable act and the activities of Fayose’s media men in promoting the Biafran cause only point to one agenda to destabilise Nigeria. That has proved us right that Fayose has no agenda than the destabilisation of Nigeria to enable him escape all illegal and criminal activities linked to him.”