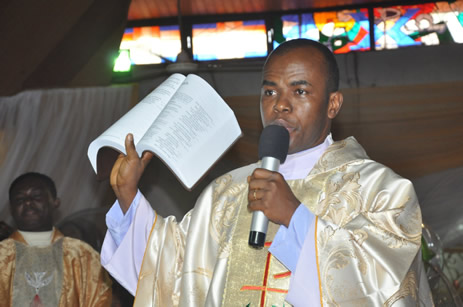 Rev. Fr. Ejike Mbaka, spiritual director of the Adoration Ministry Enugu ( AMEN), says Igbo leaders should be in the forefront for the struggle for a sovereign state of Biafra.

Addressing the congregation at one of his programmes in Enugu during the week, Mbaka said both political and spiritual leaders should lead the Biafra struggle while the youth follow suit.

He said there is nothing wrong with the agitations for Biafra but what makes him sad is “big men using our children as sacrifice” in the course of the struggle.

The priest condemned the attitude of Igbo leaders “hiding” in Abuja and abroad while “our young ones who don’t have a kobo for their businesses roam the streets in the name of Biafra”.

“Nobody should make you believe in the nonsense that the Igbo are condemned. They tell the poor to engage in Biafra agitations, there is nothing wrong with Biafra, but those that say they want Biafra, they should come out so all of us will join in the agitations,” he said.

“The poor roaming the streets in the name of agitations will now follow us from behind; they shouldn’t be the ones leading. Whatever will happen to my child should first happen to me, that’s the prayer of a father.

“We are not saying there shouldn’t be Biafra agitations but first, let the political class come out first. All of us will join, both political and spiritual leaders. Not our youth; they are killing them for us.

“Where are the leaders? They’re all hiding in Abuja and abroad. I am not saying the Igbo should be killed, I never said they should not agitate for Biafra, but let the leaders be in the forefront and not our youth.

“Whatever that will happen to these children should first happen to me, that’s what the Lord teaches us. Not the big men using our children as sacrifice. Young ones that don’t have a kobo for their businesses. They will bring them out on the main road for nothing.

“They’re not the ones that should go for this but people like Alex Ekwueme, Peter Obi, Emeka Offor, Andy Ubah, Ifeanyi Ubah in Anambra. They will come to Enugu and there are people like Ike Ekweremadu, Ken Nnamani, Sullivan Chime and a lot of others. There is also Emmanuel Iwuanyanwu, Pius Anyim and many others. e will lead while the young ones will follow us.”