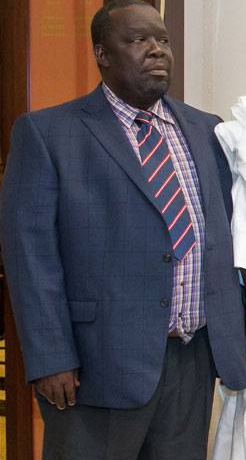 “We can confirm that the Senate Deputy Majority Leader, Senator Bala Ibn Na’Allah, has been suspended indefinitely from the APC party. The suspension was announced by Mallam Sani Dodo, the Publicity Secretary of the APC in Kebbi state.

The indefinite suspension follows a series of anti-people, anti-democratic and damn right criminal actions taken by Senator Bala against fellow Nigerians, in a hopeless attempt to retain his senate seat and escape prosecution for the Heroine smuggling case hanging over him.
It can be recalled that Senator Bala sponsored the obnoxious Social Media Bill, which promises 2 years imprisonment, N4 million fine or both for activists exposing corruption. The Bill was actually targeted at the CUPS organisation and Sahara Reporters, for daring to expose the crimes committed by Senator Bala and his boss Bukola Saraki.

The same Senator Bala went on rampage towards the end of last year by bribing unpatriotic Police officers to unlawfully arrest and detain human rights activists, like Mallam Abubakar Meli, who have been campaigning for better infrastructure in Kebbi South constituency. Bala’s last dastardly act was to send weapons carrying thugs to physically attack and injure peaceful demonstrators in Zuru, who were calling for his recall.

We at CUPS are working 24/7 with Bala’s constituency members on ground to make sure that Bala never again sets his foot in the Nigerian Senate or anywhere else that involves the governance of our people. We are confident that we will have him recalled from the Senate. Well over 100,000 signatures have so far been collected for his recall. Join us at “Democracy in Action” Facebook page for the latest update on Bala’s recall.

Note: Bala has not been officially suspended from the APC party.