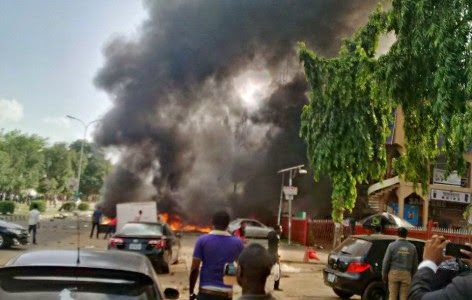 Boko Haram gunmen struck in Abuja yesterday, the third this year, killing 21 people while 21 others were injured, police said. They have been taken to several hospitals in the Fed­eral Capital Territory (FCT).

Reports said the Managing Editor (North), New Telegraph, Suleiman Bisalla, was among the dead. This is even as 21 suspected terrorists were intercepted in Enugu State yes­terday. The development created panic among residents.

In Abuja, the two suicide bombers came in a white vehicle at about 4pm at the popular Emab Plaza in Wuze area of the FCT. They were prevented from driving into the plaza by private security personnel stationed at the gate who insisted on searching the vehicle.

The driver was said to have refused to be searched by the security men and opted to park outside the gate. He and the other occupants were said to have come out of the vehicle after parking it and waited for sometime before the explosion occurred.

Most of the dead victims were women who sell banana and other fruits at the gate. There were also several others who sold other food items that died in the blast.

A trader at the plaza told Daily Sun that they were inside their shop when they heard the explosion. He said that the casualty figure would have been higher if the suicide bomber had been allowed to drive into the premises.