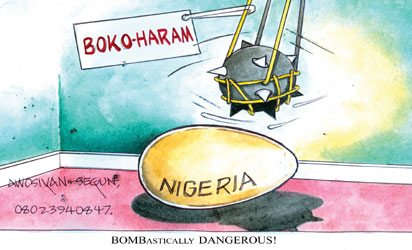 A new shocking revelation coming out from the interrogation room of the Department of State Services, DSS, in the on-going “PROCESSING” of Abu Qaqa, the spokesman for the dreaded Jamaatu Ahlil Sunna Lidawati wal Jihad, otherwise known as Boko Haram, was how N41m reportedly procured by some members tore the sect apart. naijagists.com

Indeed, an instance of “N41 million” was reportedly mentioned by Qaqa during investigation.

Meanwhile, there are strong indications that the alleged mastermind of the Christmas Day bombing in Madalla, Suleja, Mallam Kabiru Abubakar Dikko (a.k.a Kabiru SOKOTO) may be charged to court soon. Attempts to confirm this, yesterday, did not succeed.

A source privy to the on-going interrogation told reporters  that Qaqa explained to his interrogators that “a major source of distrust and acrimony in the group was a N41million that was not accounted for”.

Sources close to the interrogation provided information to Vanguard which suggested that the money which was realised sometime in January may be the instance in question.

Qaqa also reportedly told his interrogators that “Normally, the money is supposed to be shared to five groups: the less privileged, widows of those that died in the Jihad, Zakat, those that brought in the money, and the last to the leadership to be used in prosecuting the Jihad.

“We don’t know how this money was spent and nobody dare asked questions for fear of death. Even those that took part in the  operation to raise the money were also always compelled to pay Zakat on their share to the leadership. The leader, Imam Shekau appropriates what goes to the widows, less privileged, Zakat and leadership.

“The leadership also gives out wives of those killed the way he wants and marry some in the name of giving them protection.”

“Everyone lived in fear more of leadership of the group even than security agencies. For instance, I never for once believed I could be arrested. I thought I was invincible. But now I’ve realised that if I could be arrested, if Abdullahi Damasak, the spiritual adviser, could disappear (arrested), then it’s a matter of time before everyone is caught”.

It will be recalled that Vanguard had exclusively published snippets of the very early confessional statements credited to Qaqa penultimate week.

And last week, Qaqa reportedly told his interrogators that “before I was arrested some of us had already shown signs of tiredness. Most of us were tired of fighting but we couldn’t come out to say so because of fear of reprisal from Shekau on dissenting members. Several of our members that denounced the violent struggle were slaughtered in front of their wives and children. Seven were killed recently.

“Besides some of us, the non-Kanuris (Hausa, Fulani and others), in the sect were worried at the trend of arrest of our members. It is either that the security agents were so good at their job or some of our members were moles giving us out. The worrying aspect was that most of our key members arrested were non-Kanuris which raised fears that there’s sectional betrayal of members”.

Kabir Sokoto to be arraigned soon

This indication, a source hinted, “is not unconnected with the issue raised last week while he was being paraded as to his rights, which are being acknowledged.  “What may likely happen is that before people begin to raise alarm he may be charged to court; at least having paraded him before you people (media)”.

And whereas the source declined to give a date, Vanguard discovered that once he has been “thoroughly processed”, he would be charged to court.

Meanwhile against the backdrop of Boko Haram’s ceaseless bombing of Police Stations in many northern states and inability of Police personnel to confront them anytime the sect members carried out such raids, Inspector General of Police, Mohammed Dikko Abubakar yesterday threatened to sanction Assistant Commissioners of Police in charge of Operations (AC Ops) as well as those in charge of investigations (AC CIDs) in the states commands over what he described as their inefficiency in tackling or preventing such attacks.

The IG issued the threat even as he directed the immediate dismantling of Police check-points and squads across the country noting that the check points have since deviated from the purpose for which they were established and turned into avenues for corruption and extortion of innocent Nigerians.

Meanwhile, it has emerged that the IGP is dissatisfied with the way many cases of Boko Haram suspects arrested in the past by the Police under his predecessors were handled, as many of them were believed to have been let off the hook without proper investigation or commensurate punishment being meted out to them.

Speaking at a meeting with all the AC-Ops and AC- CID’s from the 36 states and Abuja, Abubakar emphasized that the decision to dismantle checkpoints became necessary because it has been abused by Police personnel often posted to man such points.

Describing the situation as unfortunate, the IG particularly mentioned such states as Delta, Lagos, Edo, and the Eastern parts of the country where such cases of extortion and corruption leading to accidental discharge are rampant adding that we cannot continue turn a blind eye to these embarrassing situation.

The IG also took a swipe at Police officers who have come to see corruption as a way of life pointing out that such corrupt tendencies were the causes of extra-judicial killings, in some Police Stations in the country. He therefore demanded a change of attitude from the officers insisting that those who are not willing to move with the wind of change and transformation were free to make a choice of be shown the way out.

On attacks by Boko Haram on Police stations in parts of the country which he regretted were being done with impunity, Abubakar said, ‘it is the inefficiency of assistant Commissioners of Police in some states that has led to this unbridled bombings of police stations in some northern states of late”.

Consequently, he demanded for more commitment, responsiveness, and the willingness on the part of the senior officers, to embrace new initiatives in crime fighting and prevention.

Also, having gone through the case files of scores of Boko Haram suspects arrested in the past for the sects bombings, attacks and destruction of property and the manner they were left to go scot-free, which inadvertently may have embolden the sect members to commit more harm, the IG has constituted a Committee to review all cases of Boko Haram suspects arrested between 2010 till date and were released on bail.

We gathered that the IGP was not happy with what he saw when he went through the files of all the Boko Haram suspects arrested and the manner many of them were released without conclusive investigations.

He consequently directed the committee to study all the case files, harmonize them and find any possible means of re-arresting the suspects.

We learnt that the IGP expressed the belief that if the investigations were properly carried out and the suspects given appropriate punishment, by now the key members and sponsors of Boko Haram would have been tamed before they got out of hand.

The committee, which has commenced work has since requested all state Police Commissioners state affected by Boko Haram activities to forward all cases of Boko Haram suspects to them. (credit: vanguardngr)