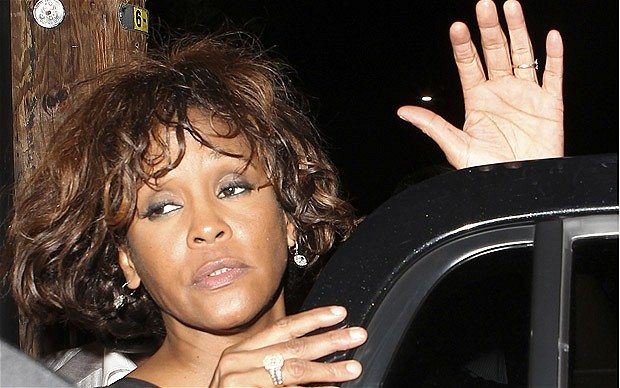 The two divas almost came to blows after Whitney failed to remember the aspiring singer who she   once pulled on stage during a concert. Ray J who had known Stacy for years, then stepped in to defend her, annoying the music legend.

The run-in preceded more clashes with security staff and fans on a raucous night out at a Hollywood Grammy party earlier this week. But despite her messy hair and dishevelled appearance no one would have guessed that less than two days later she would be found dead in her hotel room. 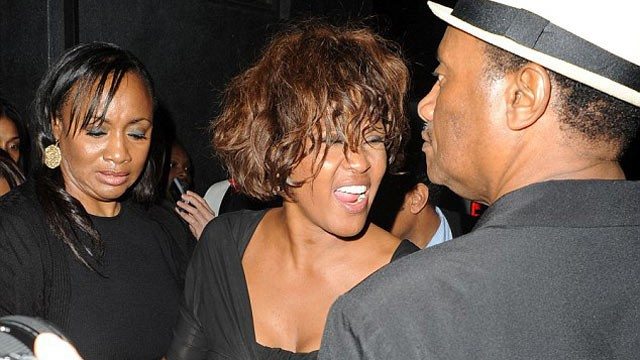 The singer was a guest at the Kelly Price & Friends Unplugged: For The Love Of R&B Grammy Party at Tru Hollywood and had even performed during the night.

The two were reintroduced in the VIP section.

A source told the website that Whitney was ‘cordial at first’ but the scene soon changed after Whitney’s friend, R&B star Ray J, stepped in.

An eyewitness said: ‘Whitney just got belligerent. Ray was trying to defend Stacy, telling Whitney, ‘Stacy’s family!’, but Whitney was feeling crowded out and hands were raised.’

The source added: ‘You didn’t know which way it could go there for a minute.’

When contacted by The Hollywood Reporter following the alleged incident, Stacy said: ‘I have the utmost respect for Whitney Houston and her talent.’

Luckily no actual blows were landed, but, the source said, ‘You didn’t know which way it could go there for a minute.’ The singer ‘partied heavily’ that night.

A witness told Us Weekly at the time that she had appeared ‘wasted’ and ‘moody’ as she exited the night club late on Thursday night.

The source said: ‘She reacted angrily to the security guards trying to get her into her car…and started cussing them out.’

The observer went on to say that even though Whitney was stopping and signing autographs for fans, ‘she would get moody again in a split second.’

The source added: ‘It was sad because her fans noticed that she was really shaky as she left the venue. She definitely was not in control of herself.’

Dressed all in black, the I Will Always Love You singer appeared angry and agitated as she left the venue and looked like she had partied a little hard.

Wearing a short black dress, the star emerged with her hair messed up and gestured aggressively to the waiting photographers.

The release of the photos showing the star’s erratic behaviour and dishevelled look sparked concern over the singer’s health. Whitney died at the Beverly Hilton Hotel, where she was staying in order to attend at perform at a pre-Grammy’s party, hosted by Clive Davis. According to TMZ, the star was seen with a large group of friends at the hotel bar on the eve of her death.

Sources told the website that the group as drinking and being loud.

And the website went on to allege that the singer and her friends stood out because of all the noise they were making, despite the fact that the hotel was abuzz with guests getting ready for the pre-Grammy festivities.

A spokesman for the local police department said that emergency services had been called to the hotel at 3.43.

Officials rushed to the room on the fourth floor where she was staying as a guest, where they found security staff attempting to revive her.

Life-saving attempts were unsuccessful, and she was pronounced dead at 3.55pm.

According to TMZ, police have sealed off the hotel room where Whitney died and will not be searching it until they have obtained a search warrant.

The website reports that their primary interest is to establish whether or not drugs were present in the room.

Despite her big night out Us Weekly reports that Whitney ‘was fine’ the following day as she conducted a sound-check to gear up for her performance at the pre-Grammys party. A source told the magazine: ‘She was present and ready…She had water to keep her vocals clear, and was trying not to smoke.’

Recently she had seemed determined to get her career back on track and had star turn in the upcoming movie ‘Sparkle’, the remake of a 1976 film due to be released in August this year.