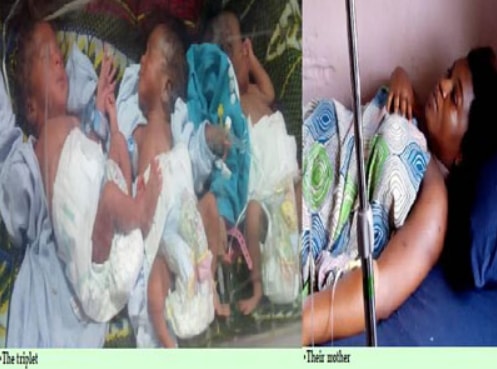 A poor man has abandoned his wife, Ijeoma Uzoma, after she gave birth to triplets in a private hospital in Bariga, Lagos.

Bariga Local Council Development Area (LCDA) Chairman Kolade Alabi has come to the rescue of the woman and her children, but her husband has yet to show up.

The babies were delivered premature at Tolu Crescent Medical Centre at Ajileye Street, Bariga, on Wednesday.

On hearing that the babies required immediate medical attention, their father was said to have disappeared.

Alabi, we learnt, sent some of his top officials to confirm the information.

After their report, he led the Head of Administration, Mrs Toyin Senaike, Medical Officer of Health Dr Wasiu Owoyele, Supervisor for Health Kunle Dabiri, and council Treasurer Femi Apata, among others, to the hospital.

After meeting with the hospital owner, Dr Mustafa Omotolani, Alabi promised to offset the bill.

He asked the council’s medical team to work with the hospital to ensure that Mrs Uzoma and her triplets got the best medical attention.

He gave the woman money and some gifts.

Yesterday, Alabi praised Joy for calling his attention to her sister’s plight.

“The local government is not only the third tier of government, it is the closest to the people and people must endeavour to contact the council for their needs. I do not see the reason why the woman’s husband should run away. That is not the solution. Children are gifts from God,” he said.

A Ward ‘D’ Councillor, Princess Yemisi Adeliyi, and some ward leaders also visted the woman and presented her with some provisions.

We learnt that the woman and her children may be moved to the general hospital.