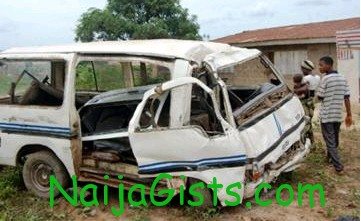 Remains of the bus

A fatal road accident that happened yesterday in Ibadan, Oyo State Nigeria has claimed one. naijagists.com

15 pupils of Summit Comprehensive College and Mary Group of Schools were injured.

The pupils and the driver, who is said to be in a critical condition, are on admission at St. Mary’s Catholic Hospital, Eleta.

It was learnt that the commercial bus, marked Lagos XG 754 LSD, was taking the pupils to school about 7:30am, when the vehicle’s brake failed near Ogbere Bridge.

According to eyewitnesses, the driver swerved into a make-shift cement shop to avoid plunging into the river.

Blood stained books and other items belonging to the pupils littered the scene.

The Coordinator of the Ibadan Catholic Health Mission, Rev. Father Clement Emerue, said the pupils are responding to treatment. He said the conductor was brought to the hospital dead.

The state government commiserated with the parents of the deceased and the pupils.

It also said it would pay their medical bills.

House of Assembly Speaker Mrs. Monsurat Sunmonu; Commissioner for Health Muyiwa Gbadegesin; and the Chairman of the Hospitals Management Board, Alhaji Olaide Abass, visited the victims in the hospital yesterday.

Describing the incident as “unfortunate”, the government officials thanked God that the children were not killed in the accident.