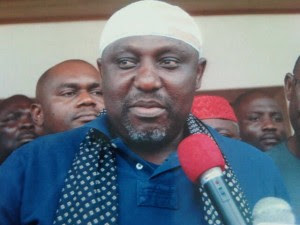 According to his spokesperson, the able governor who suffered a minor head cut is in a stable condition in the hospital.

“Okorocha is in stable condition….Imo State citizens should avoid panic as the governor is responding to treatment” – said his aide

The Governor can be seen in the picture with a bandage rolled all over his head with some blood stains.