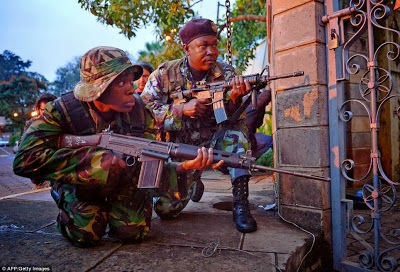 Kenyan soldiers are currently in control  of Nairobi’s Westgate shopping mall, the Kenyan interior ministry announced overnight Monday, with all the hostages trapped by Islamist gunmen believed to have been freed. 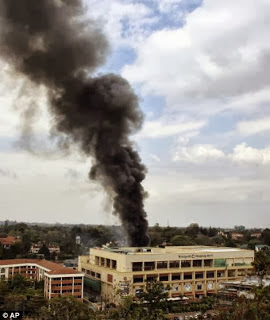 Westgate Shopping Mall on fire as terrorists blow themselves up

A government spokesman told AFP the three-day-long siege, in which the attackers massacred at least 62 shoppers and staff, was close to being declared over. He said special forces combing the building were no longer encountering any resistance.

“Our special forces are inside the building checking the rooms. We think that everyone, the hostages, have been evacuated, but we don’t want to take any chances,” Manoah Esipisu said.

“The special forces call this sanitising. At the moment they have not met any resistance, but of course we are not ruling out the possibility that there are a couple of them hiding in a remote room or corner,” he added.
After a day of fierce gunfire, huge explosions and black smoke that billowed over the Kenyan capital, the vast centre was quiet 60 hours after the gunmen stormed the complex, an AFP reporter at the scene said.

“We’re in control of Westgate,” the interior ministry said in a message on Twitter.

No details on the numbers of hostages released have been given, but 63 people were earlier recorded missing by the Red Cross, a figure thought to include hostages as well as those possibly killed.

Special forces on Monday also killed at least three gunmen and wounded several in bitter fighting in the part Israeli-owned complex, which was popular with wealthy Kenyans and expatriates. A Kenyan security source and a Western intelligence official said Israeli forces were also involved in operations, along with British and US agents.

Somalia’s Al Qaeda-linked Shebab insurgents have claimed the attack, which began midday on Saturday, when the gunmen marched into the complex, firing grenades and automatic weapons and sending panicked shoppers fleeing.

Kenyan army chief Julius Karangi said the gunmen were of different nationalities. Many foreign fighters, including Somalis with dual nationalities, are members of the Shebab force.

“They are from different countries. We have sufficient intelligence this is global terrorism,” Karangi said.

Interior Minister Joseph Ole Lenku denied that any of the insurgents were women: “All the terrorists are men,” he said, noting: “Some of them had dressed like women.”

Police said they had also arrested more than 10 people for questioning.

Kenyan President Uhuru Kenyatta, whose nephew was killed along with his fiancee, called the attack “despicable and beastly.”

The Shebab rebels said the carnage was in retaliation for Kenya’s military intervention in Somalia where they are battling the Islamists.

“If you want Kenya in peace, it will not happen as long as your boys are in our lands,” rebel spokesman Ali Mohamud Rage said in a statement posted on an Islamist website.

Shocked witnesses said the gunmen tried to weed out non-Muslims for execution by interrogating people on their religion or asking them to recite the Shahada, the Muslim profession of faith.

The dead include six Britons including a British-Australian, two French women, two Canadians including a diplomat, a Chinese woman, two Indians, a South Korean, a South African and a Dutch woman, according to their governments.

Also killed was Ghanaian poet and former UN envoy Kofi Awoonor, 78, while his son was injured.

Mall worker Zipporah Wanjiru survived by hiding under a table with five other colleagues.

“They were shooting indiscriminately, it was like a movie seeing people sprayed with bullets like that,” she said, bursting into tears.

Security camera footage seen by Kenya’s The Standard newspaper showed gunmen raking toilet cubicles with a barrage of gunfire, apparently after learning that people were hiding inside. Some survivors said they played dead to avoid being killed.

While the rest of Nairobi has largely been business as usual, deeply shocked Kenyans turned out in their hundreds to give blood, as well as raising more than $400,000 (300,000 euros) to support the families affected.

Israeli interests in Kenya have come under attack before, and the Westgate mall — popular with well-to-do Kenyans, diplomats, UN workers and other expatriates — has long been seen as a potential target.

World powers condemned the chilling attack, the worst in Nairobi since an Al-Qaeda bombing at the US embassy killed more than 200 people in 1998.

Vice President William Ruto returned home to Kenya late Monday after the International Criminal Court excused him from his crimes against humanity trial over deadly 2007-08 post-election violence for a week to deal with the attack.