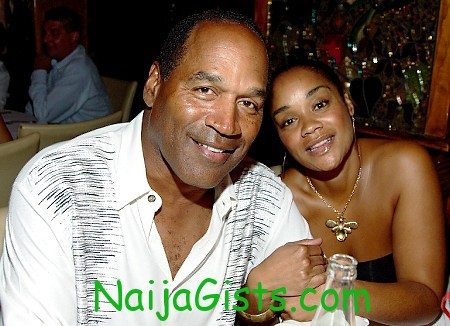 Former American Footballer, O.J Simpson who is currently in jail is facing foreclosure on his Florida home as his oldest daughter Arnelle hasn’t paid his mortgage in 2 years. naijagists.com

Simpson is furious with Arnelle’s behavior and is blaming her for squandering his $25,000-a-month NFL pension, and cannot pay the $3,133 mortgage on his four-bedroom home.

Payments have not been made on the house since 2010, and O.J. was surprised when he was approached to sign paperwork to fight the foreclosure.

An angry O.J. was said to have called his 39 year-old unmarried daughter from his Nevada prison base and accused her of blowing his money on alcohol, shopping and living a lavish lifestyle.

Arnelle is said to be a shopaholic and a chronic drinker, who is fond of taking friends to expensive restaurants and footing the bill.

As it is now, all he could do at this moment was just bark and yell from behind the bars as he has 31 years of his 33 year jail sentence remaining.