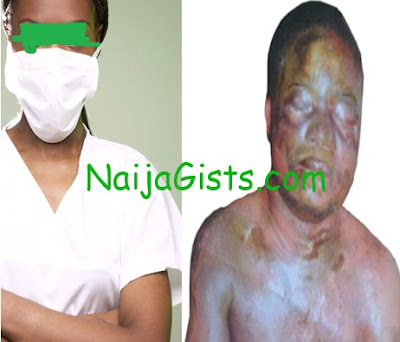 A nurse identified as Dorothy Hayford Nkanu has been arrested in Cross River State, Nigeria for allegedly pouring acid on his boyfriend, Edmund Educhukwu.

She did this evil act on suspicion that he was dating another woman.

Edmund was immediately rushed to UCTH where doctors are working
round the clock to save his damaged face and eye.

We learnt his right eye has been damaged beyond redemption

“We even had passionate sex that night.  It was in the morning that she did this to me without any fight.”

Dorothy had once complained that some people had told her that I was dating another lady whom I intend to marry and abandon her after these several years together.  But I reassured her that it was not true that people were only trying to destroy our relationship.  It did not occur to me that she was still harbouring the grudge,”

After pouring the acid on me she said ‘if the God you are praying to supports your plan, I will now see the woman that will accept you with your eyes blind and face destroyed’ and she ran away”.

As it is right now, Edmund needs a costly skin transplant surgery to restore his damaged skin.

His damaged eye has to be done in the UK or USA.

What a wicked woman!