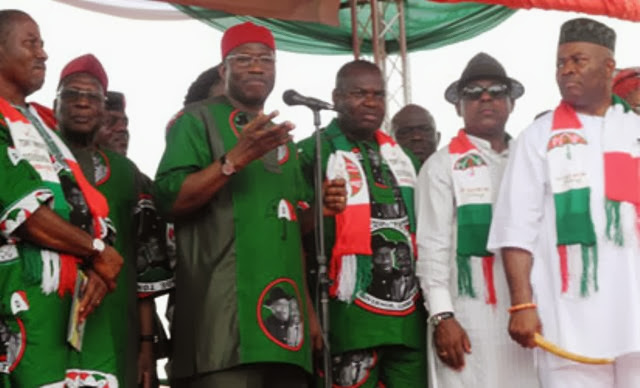 The All Progressives Congress (APC) said yesterday it has uncovered a plot by the Presidency to use the military to rig the March 28 presidential election. To achieve this, the party alleged that the Presidency has entered into an alliance with top echelon of the military even as it claimed that a secret letter has been sent to commanders of divisions and battalions to ensure that President Goodluck Jonathan is re-elected.

National Chairman of APC, Chief John Odigie-Oyegun, made the allegation at a news conference in Abuja.

He said: “We are aware that the Presidency has forwarded a secret memo to all commanders of divisions and battalions of Nigerian Army for a three-day strategy meeting in Kaduna from today on how to use the military to intimidate voters in APC States to rig election in favour of President Jonathan.

“Since recent revelations about the role of the military in Ekiti elections is demonstrable proof of how far this government will go to compromise the military as an institution, could it be that when the service chiefs said they would not have enough personnel to provide security for the elections, what they are actually saying is that they would not have enough soldiers to intimidate voters in favour of the ruling party PDP, if the elections had proceeded as scheduled?”

The APC chairman, flanked by the party’s governors and leaders, however said the party still has confidence in the military to continue to protect the country.

Odigie-Oyegun, who accused the President and Peoples Democratic Party (PDP) of being desperate to remain in office, alleged of plans by government and security operatives to commence arrest and detention of APC leaders soon.

He said: “We are all witnesses to the way Independent National Electoral Commission (INEC) was intimidated into postponement of the elections despite repeated assurances of its readiness. We are aware of plans for worse intimidation in the days ahead. We are aware of plans to intimidate and orchestrate arrest of our leaders across the country on frivolous grounds. We are now aware of how PDP used intimidation and arrest to rig the last governorship election in Ekiti State.

Describing election postponement as a disgrace, Odigie-Oyegun said it was curious that the same service chiefs that said on February 2 that the environment was conducive for the conduct of elections recanted days after and wrote INEC demanding for the postponement of the polls.

He recalled: “It is important to note that the service chiefs’ letter to INEC demanded postponement for “at least” six weeks. This, we must note, is a booby trap. Embedded in that phrase “at least” is a window to push for another postponement.”

“We are just recently recovering from the crisis precipitated by the political crisis of 1993. We cannot afford another. The greatest threat to our democracy today is the way the ruling party has compromised the leadership of the Nigerian military to serve the personal agenda of President Jonathan. This is a dangerous game. A recent court judgment in Sokoto clearly ruled that the military had no role in the electoral process. What happened with this postponement is that service chiefs simply vetoed a democratic process on the directive of President Jonathan. We know what politicisation is doing to our once proud military institution,” he said.

Speaking on campaign messages by the PDP and some officials of government, the former Edo State governor accused the ruling party of employing divisive strategies to win the sympathy of the electorates.

He claimed that government officials and PDP leaders were using religion and Boko Haram to further divide Nigeria . He alleged, “never in the history of our country had a Federal Government and the President of Nigeria so wantonly mobilized ethnic and religious sentiments to divide the people against themselves for selfish political reasons. “By now, everyone is aware how a close confidant of President Jonathan, Chief Edwin Clark, called for the sack and arrest of the Chairman of the INEC because, according to him, the INEC Chairman was working for the interest of the North. He said this under the aegis of a Southern Nigerian People’s Assembly.

“We are also aware of how the Vice President of Nigeria, Namadi Sambo, unfortunately invoked religious sentiment to campaign for his party in Niger State. The level of ethnic and religious baiting that we are currently witnessing is unprecedented in the political history of Nigeria. The road to Rwanda and other countries that have suffered tragic ethno-religious conflicts is not far from what PDP is currently invoking on our country.. We owe it a duty to stress the point that under our watch, Nigerians regardless of their ethnic origin or religious disposition would be free to operate without let or hindrance.

“Only few days ago, the Director of National Information Centre, Mr. Mike Omeri, claimed that government has uncovered a plan by Boko Haram to bomb polling centres without providing a single shred of evidence. The following day, President Jonathan declared in a church in Lagos that Boko Haram has planned to bomb the entire country. We see this as deliberate scare-mongering to discourage Nigerians from coming out to exercise their democratic right to vote. This is quite unfortunate. The President that should be protecting the people and assuring them of their safety is now the one scaring them,” Odigie-Oyegun said.