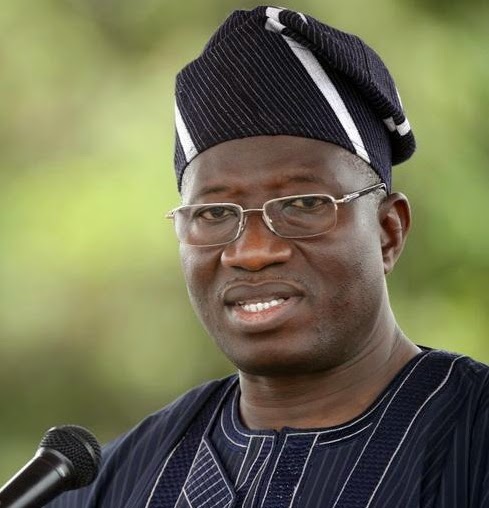 April 11, 2015 – What Is President Jonathan Doing In Lagos On Governorship Election Day???

The All Progressives Congress (APC) yesterday alleged a grand plan by the Peoples Democratic Party (PDP) to force its way through in today’s governorship election in Lagos State.

The PDP plan, according to the APC,includes gun running,use of fake result sheets, outright bribing of voters and deployment of the police to intimidate and harass its top members.

Addressing reporters in Lagos,the National Publicity Secretary of the APC,Alhaji Lai Mohammed, said President Goodluck Jonathan flew into town on Thursday with “ a war chest of 10 billion naira specifically for the Lagos elections.”

Foot soldiers of the PDP are said to be under instruction to “storm polling units in areas where the APC is strong either to disrupt voting by attacking voters or simply carry away voting materials,” while a PDP point man “has been driving around designated pick-up points to drop fake NYSC and military uniforms, guns and cash.”

“In a clandestine and brazen operation in Lagos, this point man and his team have also added the distribution of fake result sheets to PDP agents,” Alhaji Mohammed said.

He said further:“At a popular Maryland vendor stand, which is one of the muster points for the PDP thugs, three big bags containing NYSC polo shirts, as well as fake Police and Army uniforms, were handed over to some PDP thugs by the agents.

“Then at 5:30 am this morning (yesterday), at exactly the same location, the vendor stand in Maryland close to Mobil Filing station, two white Hilux trucks pulled up and dropped 60 medium size rectangular cartons.

“On hand were the same men who collected the bags of fake NYSC t-shirts some days back. Their conversation, which took place in the Yoruba language, revealed a lot. The four men asked from the person, delivering the cartons ‘owo nko’ (where is the money). The man in the car said both the money and the guns were inside the box. He also explained to the four men that later in the evening of today (yesterday), the four men should return to the same point to collect fake result sheets from Bajulaiye (the hub of printing in Lagos) that will be wrapped up in newspapers and delivered just like the way newspapers are delivered.

“The men who collected the guns, fake uniforms and result sheets are those designated to storm polling units tomorrow. They will also instigate violence across the state, with a view to scaring away voters, especially in APC strongholds.

“The PDP has turned today’s elections into a do-or-die affair. The plan is to use thugs and militants who have also been imported into the state to intimidate voters, snatch ballot boxes and provide cover for the PDP to announce false results tomorrow. Fake ballot papers as well as result sheets are already being issued to the PDP.”

Alhaji Mohammed said that President Jonathan,soon after his arrival in Lagos on Thursday to “oversee the PDP’s rigging plans,” met with Minister of State for Foreign Affairs, Musiliu Obanikoro,PDP governorship candidate in the state,Mr. Jimi Agbaje, and the OPC factional leader, Gani Adams, in the presence of AIG Mbu.

He said the meeting perfected plans to rig the election after the PDP chieftains complained that the state Police Commissioner Kayode Aderanti refused to co-operate with them.

The CP was thus sidelined and Mbu given the go-ahead to take charge of the security aspect of the elections by allowing the PDP to announce fake election results .

“Acting on Jonathan’s directive, Mbu stormed the Lagos Police HQ today (yesterday) and took over the CP’s office, claiming he is now in charge of the election in Lagos.

“Meanwhile, the IG of Police, Suleiman Abba, had posted the DIG in charge of training in Abuja, Mr Argungu, to oversee the election in Lagos. Mbu had been posted to take charge of affairs in Ogun State. The President by his directive has overridden the directives of the IG without his knowledge,” the APC spokesman said.

“The PDP is attempting to use Mbu and the GOC – who is Jonathan’s relation – to force a false result on the REC.

“It is interesting that despite their failure, in view of the dollar rain that fell on the South-west, to capture the region, they have not relented in wasting public funds to swing the outcome of elections,” he pointed out.

“Nigerians have shown that they cannot be swayed by bribery. If money were to be the determming factor, the PDP would not have lost the presidential elections. Just as they failed on March 28, they will fail again tomorrow (today).”

Besides, Alhaji Mohammed said key leaders of the APC have been targeted for arrest, harassment and intimidation as part of measures to destabilize the party today, while PDP point men have been designated to invade the residences of the leaders, starting from last night.

He said: “Having milked its cash cow to death on March 28, the PDP has decided that it would grab new cash cows. Such cash cows are economically-viable states like Lagos and oil producing states like Rivers.

“The PDP has vowed not to lose any of such states, hence the desperate acts we have enumerated above. They do not care about the votes of the people, and are not interested in counting votes or making them count. All they want is to capture any state that catches their fancy.”

The party urged its members and supporters not to be intimidated, but be “ extra vigilant and to document all cases of voter harassment and intimidation as well as election malfeasance.”

Local and international observers were told to “pay a very close attention to the conduct of the elections in Lagos and River states.”

Earlier yesterday,Alhai Mohammed in a statement warned that “the people will resist any attempt to rob them of their votes.”

He spoke of a PDP rigging machine headed by President Jonathan to rig the Lagos elections, and drew attention to “ the airlifting from Abuja to Lagos of a Black Kia Mohave SUV, with the number plate DHQ 340 which was packed with election materials (especially

The APC spokesman said that the SUV “will be free to move around (because of its number plate) despite the restriction on the vehicular movement during the elections.

”It is sad that the same President, who conceded defeat in the presidential election and then followed up with a speech in which he said he would like his ‘legacy’ of free and fair elections to endure,is the one who is presiding over a desperate move to steal the people’s votes.

”How can President Jonathan’s ‘legacy’ endure when one of his last acts in office is a seeming vengeance mission to lead his party to capture Lagos because the PDP sees the state as a cash cow that they can milk to death with the party’s gravy train at the federal level having derailed?” the party queried.

”In their desperation over the Lagos elections, they have shamelessly divided the people along ethnic, religious and regional lines, thus setting the stage for the condemnable hate speeches to which they have in turn latched on to further whip up primordial sentiments.”

The APC advised the President to desist from any vengeance mission that will only rubbish whatever is left of “his so-called legacy of free and fair elections.”

It urged all APC members and supporters, and indeed all the good people of Lagos, to be extra vigilant today to “ thwart the evil machinations of the fallen behemoth called the PDP.”