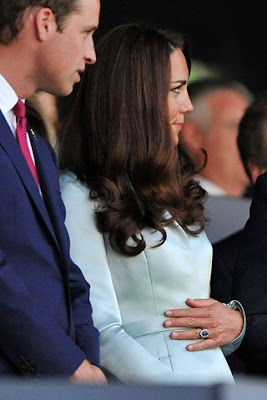 Months after their talk of the town wedding in London, England, the Duke & Duchess of Cambridge today announced they will be having a baby soon. naijagists.com

Just 2 months ago Kate Middleton was said be pregnant with twins which turned out false.

After she suffered serious pregnancy related morning sickness, Kate Middleton was taken to a royal hospital in London where she was confirmed pregnant.

Pregnant Kate Middleton is expected to stay at King Edward VII for a while.

Here is an official announcement from them

“The Queen, The Duke of Edinburgh, The Prince of Wales, The Duchess of Cornwall and Prince Harry and members of both families are delighted with the news.

“The Duchess was admitted this afternoon to King Edward VII Hospital in Central London with Hyperemesis Gravidarum.

“As the pregnancy is in its very early stages, Her Royal Highness is expected to stay in hospital for several days and will require a period of rest thereafter.”

This baby will be born 3rd in line to the throne, a much awaited grandchild to the Queen of England.

D’banj’s New Girlfriend 2012: He Proposed To Me Says Kate Kokoma Ikpong
Comedian Princess: I Was Embarrassed At A Church Service Because I’m Single