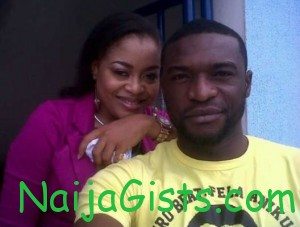 Kidnapped Nollywood actress, Nkiru Sylvanus, the present special assistant to Imo State Governor Rochas Okorocha has been released from the den of kidnappers.naijagists.com

According to sources, the two (Ex-Mr Nigeria & Nkiru) were released few hours ago.

At around 9pm tonight, Nkiru and Kenneth Okolie were both blindfolded and dropped at a secret location in Owerri, the capital city of Imo State, Nigeira.

After the payment of an unspecified amount of ransom, their kidnappers left them at a spot they agreed with the people who paid their ransom.

Their family and friends have picked them up at the location this evening.

Kenneth Okolie, Nkiru Sylvanus and an unidentified passenger were kidnapped on the night of Saturday December 15, 2012 at Concorde & Cathedral road by some masked gunmen.

As at the time of this report, we are still unsure of the identity and the fate of the third passenger.

Thank God for their safe release.
Stay in touch with NaijaGists.com for update on this story