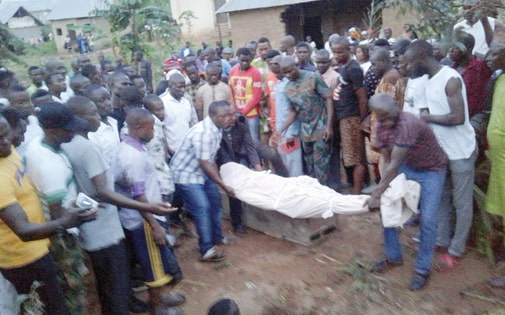 Kobi: Abuja Village Where Flood Victims Are Buried By Riverside To Appease The gods

The traditional beliefs and customary practices of the Gbagi indigenous tribe in Abuja has forced a family that lost a son to the recent flooding to bury him at the banks of the river. CALEB ONWE reports

To Mrs. Maryrose Nwizu, the death of Uche Nwizu was an irreparable loss, but having to live forever without the opportunity to convey the remains of her son to her hometown for proper burial, was even more traumatising to her and her family.

The distressed Mama Nwizu, travelled all the way from Arochukwu in Abia State to Abuja with the intention of conveying the remains of her son back home for a befitting burial, but the natives of Kobi, a rural community in Abuja, said it was against their tradition. According to their custom, anybody who was drowned by the waters from their river cannot be buried elsewhere but by the riverside.

You may call it a myth or superstition but among the indigenous people of Kobi, any deviation from this ancient practice could spell doom not only for the family of the drowned person but the community.

So, in tears and sorrow, the body of Uche Nwizu, the 24-year-old flood victim was buried by the riverside in Kobi. His mother just to said a hard farewell to him, as his last journey goes the way dictated by the tradition of the community where he once lived.

It was a helpless situation for his mother as she sat down to watch the young men who were struggling to scoop water away from the grave already dug by the riverside.

Even the crowd of sympathisers who thronged there could not stop the torrential tears that continued to roll down her cheeks with increased intensity.

Inside Abuja gathered that the woman’s sorrow heightened while the waiting for the arrival of the remains of her son from the morgue became too prolonged.

Sympathisers were also getting worried because by 6.30pm, the corpse had not arrived from the morgue. Some of the sympathisers had started dispersing due to the belief that burying an adult in the night was a taboo.

It was later gathered that the delay to the arrival of the corpse was due to the inability of the family to meet up with some of the demands of the morgue attendants in good time.

According to the woman, she would have loved to give her son a befitting burial in line with the Igbo tradition, but had to helplessly watch the remains of her son buried in a foreign land, just to appease the goddess of the river.

Surrounded by sympathisers, the distraught woman before the final burial rites performed by the riverside, like a every other bereaved mother, was pained by the death of his son, cut off at a very prime age, but was devastated by the fact that her son’s grave may never be identified given its location in the muddy flood plains.

“We agreed to bury my son here because of the tradition which says that anybody that is drowned by water cannot be taken home for burial but must be buried by the riverside. Though it was a painful decision taken by the family, but to avert disaster, we agreed to keep that tradition,” she told Inside Abuja.

Another family member, whose wishes were overpowered by the desire to respect tradition, was the deceased elder brother, Onyebuchi Nwizu, who travelled all the way from Onitsha in Anambra State to Abuja for the undesirable final burial rites of his younger brother.

“I am not happy that Uche will be buried by the riverside in a strange land but due to lack of support, I had to agree to the suggestion that the tradition must be kept. My desire was to take the corpse home and bury him by the riverside in my place but I could not afford to pay the bills of taking the corpse to Arochukwu. What we also decided was to bury him here and later perform the final burial rites at home,” Onyebuchi said.

An Igbo resident in the Community, Abuchi Okoafor, also attested to the fact that the tradition of burying a flood victim by the riverside subsists in some part of Igbo land.

Okafor, who was at the burial site of the late Uche, stated that the tradition of burying a flood victim by the riverside was not new, even in most of the communities in Eastern Nigeria.
He told Inside Abuja that failure to keep this age long tradition would spell serious doom for such defaulters.

His argument was predicated on the premise that the river goddess would place a perpetual disastrous demand on the lineage of the family, or even on the community. Okafor explained that if a flood victim was not buried by the riverside, the flood would continue to wreak uncontrollable havoc in that community.

He blamed the shabby burial rites of Uche on his attitude towards the Igbo Community activities while he was alive. He said the late Uche never identified with any serious socio-cultural group in the community. According to him, the deceased was not part of the organised Igbo Community Assembly in the place and bemoaned the lackadaisical attitude of so many Igbo youths, who believed that living in isolation was an ideal lifestyle.

“The little efforts you see from some of the Igbo youths here, who are helping to bury him, is coming out of sympathy that one of their own was dead and cannot be left to the vultures. Uche would have received a fairer treatment if he was a member of the Igbo Community.

“Uche’s unfortunate death and burial circumstances, would be the second time the Igbo community here would be put in a fix about what to do about their death.

“The first experience was last year when one young man died and because he was disowned by his family, and the Igbo Community had to make little effort just to avert an impending reproach, the corpse of the Igbo youth was finally given a very shabby burial here, and it was because he never belonged to the Igbo Community,” he said.

One of the leaders of the Kobi community, Jalo Shekwehi, told Inside Abuja that it was in the interest of the family of the deceased that he was buried in the place where he died by the flood.

Shekwehi, who was so confident that the tradition of burying a flood victim by the riverside has not lost its efficacy to any civilisation or foreign religion, also boasted that had the family decided to convey the corpse of late Uche to his hometown, another disaster would have befallen them on the way.
“The goddess of the river demands that anybody drowned in the river must be buried close to the same river. Otherwise, it would become a debt that the defaulting family or even the community will continue to pay.

“In Gbaygi land, we keep that tradition and I believe the tradition also exist in other parts of the country. Considering the adverse effect that disobedience to this tradition would cause, we have advised the family to bury him here. We also granted them the permission to bury him in this place, so that the entire community can be free from the curse,” Shekwehi said.

It could be recalled that recently, a massive flood swept through Kobi and several other communities in the Federal Capital Territory. The flood left on its trail huge losses in terms of lives and property.