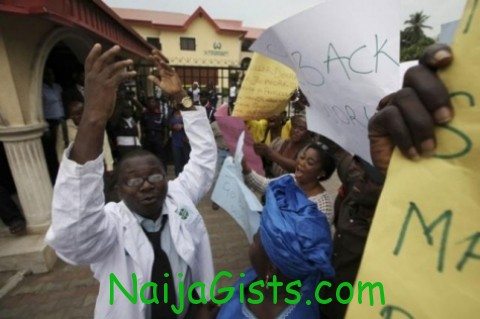 All 788 recalled doctors in Lagos State will formally resume work on Wednesday after all the doctors would have collected their recall letters from the State Health Service Commission, HSC. naijagists.com

The doctors were recalled by Governor Babatunde Fashola last week Thursday but are yet to resume work, saying that they wanted the state government to issue recall letters to all the doctors before they could return to work.

According to Dr Olumuyiwa, Chairman Medical Guild Of Nigeria, the doctors had been recalled unconditionally and that the last doctor would collect his recall letter by 4.00 pm today.

Odusote stated that no doctor would resume until the last doctor collected his or her recall letter.

He added that after the doctors would have all received their letters by today, the congress would meet later in the evening to suspend its strike and resume work tomorrow.

According to him, the delay in issuing the letters was not from the doctors, but from the government, saying that the guild had tried to persuade the government to issue all the letters yesterday so that they could resume work today, but noted that it was not possible.

Odusote said the doctors would kick off negotiation with the state government on the lingering welfare packages for its members immediately they resumed work.

The doctors had embarked on strike early May after the three-day warning strike. The state government had issued them three different queries which were not answered by the doctors.

They were later asked to appear before the Personnel Management Board, PMB, to explain their action but they did not appear.

The government wielded the big stick by sacking 788 doctors and the battle for their recall had since been on, with a court action instituted by the doctors against the government at the Industrial Court. The Nigeria Medical Association, NMA, also tried to intervene in the crisis.

Incessant Killings Of Christians In Nigeria: Anarchy Looms – CAN
General Buhari And Tinubu In Merger Talks