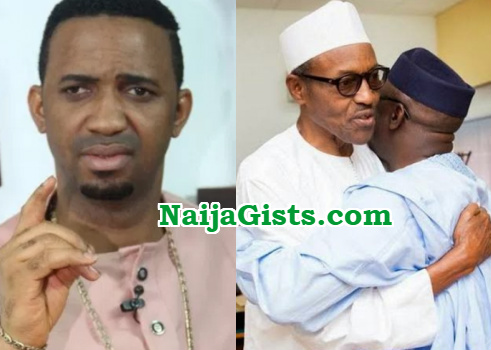 The founder of Lagos-based Liberation ministry, Chris Okafor has come after Pastor Tunde Bakare and Rev. Father Ejike Mbaka for refusing to criticise Buhari’s government over the current economic recession and the detention of IPOB Leader Mazi Nnamdi Kanu.

While preaching on Sunday, Okafor angrily called out the big men of God when he yelled, “Shame unto pastor Tunde bakare!” Then he proceeded, “Father Mbaka, what has happened to you?”

Okafor noted that Bakare was one of those who led the Save Nigeria Group, SNG, group to occupy Lagos while protesting so called bad governance under former president Jonathan.

He said Bakare was also a very vocal critic of that government and wondered why he had gone so silent even when it was obvious that Nigeria now had a government that was far worse than the one he protested against, describing him as “a two-faced Pastor!”

He further accused Father Mbaka of discrediting former President Goodluck Jonathan’s administration probably because, as alleged, he requested certain favors from that Government but was turned down.

He wondered why Father Mbaka, who openly told the world that President Buhari was the messiah had now gone so silent, and was shamefully unable to even criticize his regime in the face of gross misconduct and bad governance.

“Mbaka, go and examine your prophetic ministry”, he further disclosed.

“What has happened to you, Father Mbaka?” He asked.

He added that for Father Mbaka to now complain that people were dying of hunger and still find it difficult to criticize the government of the day simply makes him a hypocrite.

Speaking further, he questioned the silence of the General Overseer of the Redeemed Christian Church of God, RCCG, Pastor Adeboye on the pastor who was killed during a morning cry session on the outskirts of Abuja.

He also wondered why the Vice President, Prof. Yemi Osinbajo who is a pastor, has done so little to help.

The man of God said that if Christian leaders were speaking out and doing what they were supposed to be doing, “we wouldn’t have a country where the rule of law means nothing and the government doesn’t even respect court orders.”

The pastor, who described the present administration as oppressive, wondered “Why should Nnadi Kanu still be in detention when the court has given orders for his release? Why can’t they obey the court orders first, and then follow due process?