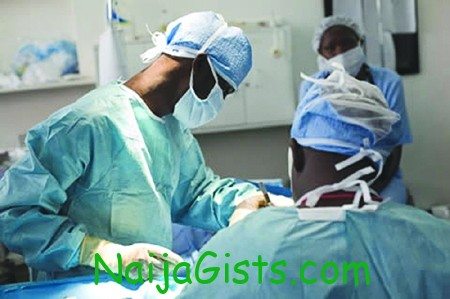 This strike trails a sudden disruption of their meeting by Government-sent police officers.

Lagos State government had ordered the doctors to appear before a disciplinary panel set up to try the doctors for embarking on three days warning strike and for refusing to answer the queries issued them.

At the Health Service Commission, HSC office at Lagos Hospital this morning, armed policemen were deployed at the entrance, preventing people from entering the venue of the Personnel Management Board, PMB, meeting, the disciplinary panel set up to try the doctors.

The 1,100 doctors in government’s employ shunned the disciplinary panel set up by the government to try them for embarking on the last three days warning strike.

The doctors went to the venue of the PMB sitting on Lagos Island, Lagos, Southwest Nigeria today but refused to face the panel and dared the government to do its worse.

As a result of the presence of hundreds of doctors at the venue of the PMB sitting, activities in Lagos hospitals were virtually paralysed as there were no doctors to attend to patients.

Disaster looming in the public health sector of Lagos State.