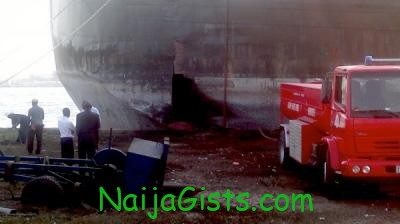 According to the daily times, a major gas explosion which occurred on a ship while workers were on it in the Marina area of Lagos, on Monday afternoon.

Eyewitness account states that the explosion which most likely occurred on a Naval jetty left one person, a worker on the vessel, severely burnt. The worker was rushed to the hospital.The explosion also threw metal debris which hit about 5 cars in the UBA car park, leaving 3 of them seriously damaged.

Another witness who identified himself as Oluwole, said that the incident occurred at about 4pm.

“We were in the UBA car park, when we heard an explosion from a ship across the park,” Oluwole said, “People in the parked had to run for their lives. I sustained some injuries on my hand and leg.”

Few financial institutions in the area evacuated their staff and boats were also moved away from the scene of the explosion.