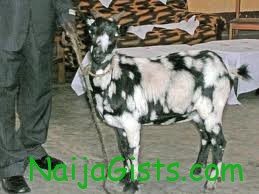 Wonder shall never end in this world o. A man from Zimbabwe who sexually abused a goat few months ago has been ordered to pay the goat’s bride price.

In this unbelievable scenario, a Chirumhanzu man has appealed to police for help after being been ordered to pay bride price and marry his neighbor’s goat he was caught having sex with.

The man was said to have had carnal knowledge of the beast more than once and the goat is reportedly pregnant at the moment. “This was not the first time that Dziva (the culprit) has been caught red-handed being intimate with the neighbor’s goats,” a local villager said.

The accused however admitted being found in the goat’s pen but denied having any sexual relations with the animal, saying:

“It’s only suspicion, I was not caught red-handed but they (goat’s owners) claim that their goat is pregnant and they are demanding that I pay for that.

If they found me in there (goat pen), does that mean I was being intimate with their goat?”

This world is turning into something else ooooooo.