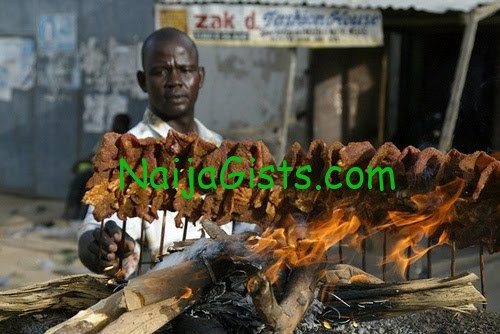 According to a leaked report obtained by Christian Association of Nigeria, South East Zone yesterday, Boko Haram Islamic Jihadists and their sponsors have concluded their evil plans to declare holy war against southern Christians by;

Everyone in the South should be very careful when eating Suya or any product that is imported from the North.

Bishop Emmanuel Chukwuma raised the alarm at a meeting in Enugu yesterday.

The names of those who are sponsoring this are in our hand now. So, it is a form of Jihad to make sure that Nigeria is frustrated and islamized and we are saying we are going to resist it, we are prepared to resist and they will not succeed.

We have our information because there is already a Boko Haramist that was converted and has leaked most of these secrets to us and we have our document and information. So at the appropriate time we shall strike and we are waiting for them.”

That is part of the information available to us now. There is a powder that is now being imported which they will spread on suya and after two weeks it will start eating your liver and other organs. We have gotten that information also.

Let the Sultan hear that because he told our youths the other day that everything that is happening, he has a way of obtaining information, I too have a way of collecting my information and we are ready to match force with force right now.”

Expressing disappointment and dismay in the security agencies, Bishop Chukwuma lamented that it was disturbing that they could not put in place measure to forestall the bombing of churches which had reoccurred every Sunday.

“We call on the Federal Government to step up a serious security strategy that will protect lives and property of Christians in the north to avoid a volatile action from Christians in the South. We also want to put an alert that Christians in the South are ready to face them squarely because we heard that they have infiltrated this place, especially Enugu. We are prepared for war- physically and spiritually against any form of attack on the church. Time has come for reprisal because nobody can stop us from worshiping our God”, the South East CAN leader said.

Bishop Chukwuma, however, declared that Christians were fully prepared for war “physically and spiritually” to defend themselves against any attack on churches and worshipers anywhere, declaring that “nobody will stop us because the time has come for reprisal.”

Keep in mind they’ll not use Suya Only, they’ll use several products imported from the North.

Please share this with your friends and families. Be your brothers keeper.