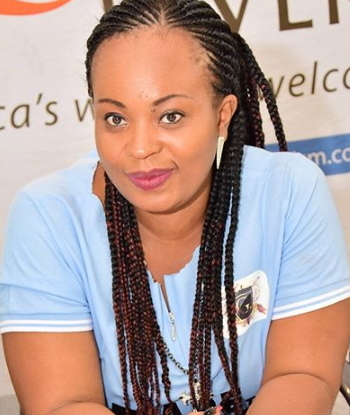 Nollywood actress Maureen Solomon quit acting after she got married in 2005 to raise a family. In 2011, the actress returned to feature in Uche Elendu movie and co-produce “In Too Deep” with another actor.

Since 2011, the actress  has never featured in a movie.

The Entertainer recently visited the Lagos home of the beautiful and brainy actress where she revealed why she left the scene at the peak of her career.

Enjoy the interview below:

It seems marriage has changed you. You look more beautiful, what is the secret?

Thank you dear. First of all, it is God that has made me beautiful. I know and I am sure that it’s Him. Secondly, I don’t go out much. So, it’s peace of mind, nothing much and no secret really.

You’re one of the actresses that people loved to watch in those days. Your fans would like to know why you have been off the screen for so long?

It’s not so much silence because I want it to be so, but the fact that I am focused more on the family front, which I feel is more important. For all these years, I am grateful for the time that I have spent with my family, and continue to spend. I have devoted my time to my children for some time now. So, right now, I am coming back to work. My absence all these years has been because of my family.

There is this rumour that your husband stopped you from acting. Is there any atom of truth in that?

As a matter of fact, I got married in 2005 and I acted till 2011. The last time I did a movie was in 2011 and my husband never stopped me. So, I wonder why he would stop me in the middle of the way. My husband actually encourages my work, even in my going back now by the grace of God. It is still him that is pushing me and he will always spur me to do greater things, not just the normal thing we know of. So, he never stopped me, I stopped myself because I needed to dedicate more time to my children. My last house girl left as at the time I decided to stay home and I decided not to get another one. I practically had to become the house girl.

The last time you featured in a movie was 2011. What movie was that?

Yes, I did two movies in 2011. One was Uche Elendu’s movie. I co-produced her movie, ‘In Too Deep’. I think that was the last major film I did. The other one, I remember I travelled to Oba to shoot it. I can’t even remember the title. Those were the last movies I did before I stopped.

It’s not too long. Funny enough, to some people, it is. When I look back to when I started in the industry till now, it seems like it was yesterday. Seven years for me is not a long time.

What would you say has changed in the industry between when you left and now?

Honestly speaking, some people might go crazy because of what I am trying to say. The only difference that I can see is the fact that, we can now go to the cinema. Our movies are now in the cinema, but as far as I am concerned, most of the storylines are still the same. It hasn’t changed which I would love so much for it to.

Few weeks ago, Rita Dominic made a comment that Nollywood producers rush to the cinemas to show low quality movies, and some producers went for her head. Do you agree with her opinion?

That was why I said a lot of people would not like what I am going to say. If I should say my mind, a lot of people are going to go crazy. Nothing has changed in the industry; there is nothing different from the movies you watch in the cinema and the movies that they produce in Asaba. For me, it is just the better and quality tools being used.

My husband is my biggest critic. So, I will say that it is either the creative people are not being given enough opportunity or the leadership of Nollywood somehow lacks creativity. We need originality and creativity and I know that in Nigeria, we have abundance of such people, but either that they don’t have the opportunities. Apart from creativity, we still need people in the area of sponsorship, and people that will spur us to move forward. I know very well that we have a lot of creative people and a lot of original ideas but we lack the opportunity and help to get them out.

Talking about creativity, we have new crops of people in the industry now. Would you say that producers prefer to use these new crops of actors?

I can’t really say but I know that most of these new actors are good. But there are still some of them that need a lot of training. I have heard in some places that the old actors need to come back, as they don’t understand the new ones. I don’t know if that is a compliment or something else, I have heard people say that to me a lot. We don’t have places where new actors can actually go and train. And on the issue of them being preferred by the producers, I can’t really say, but I know it has always been a norm in the industry for producers to go for the person that the face will sell market more. So, if they think that the new faces sell market more, maybe that is why, but I know to a large extent that, producers don’t call people because they are very good.

Would you also attribute this to the fees they pay to the new ones compared to the old ones?

There is this rumour that people in the industry use devilish power or what they call ‘juju’ on others. Is that true?

Are you kidding me? I have no idea. Like you heard, I have also heard but my own prayer is that I don’t come across anybody that does that. But I wonder why they would have to do that, the industry is so large, it can contain everybody. So, why would they need those fetish and devilish things? Is it for more work? You can’t even be on three different locations at a time.

How did you come into the industry in the first place?

I have always wanted to act. In my nursery school days, the major programme I took part was dancing. Then from my primary to secondary school, there was no drama that I didn’t partake. My mom has always known that to be part of me. So, when I watched movies, I would be like, ‘mummy I want to act’ and she would always laugh. My mom was working with the Union Bank then and she always says that Pete Edochie was one of their customers. So, in my mind, I would say ‘will this woman ever introduce me to him?’ But I never knew how to tell her. Then, there was this day that everybody in my house traveled apart from my elder sister.

I came back and she wasn’t at home, but someone told me where she went. I went there to collect the house key but when I got there, they were having an audition. They were asking some people to act this way and others that way. The person that was directing was Lancelot Odua Imasuen. And he said, ‘you this way’. I forgot the key that I went to collect and joined the queue. The next day, my sister came home and said that my name came out. And that was it; that was how I did my first movie, ‘Alternative’. From there, I continued. I started in the industry early enough, I got into the industry when I was 17 going on 18 and in December 2005, I got married.

How much were you paid for that movie?

N2,000 and I played six scenes, and it was a big deal for me. It was my second time to earn money. Before that time, I had worked as a receptionist somewhere; the manger chased me to my house, I think he wanted to woo me, and after that one month, I collected my N4,500 salary and ran away.

What’s the worst thing you have ever heard about yourself?

The only thing that I heard that brought me to tears was shortly after my first movie. It was a story in a newspaper. I can’t remember the exact title, something like ‘Maureen Solomon on the rumpus side’, that was when I was dating one of the actors. They said that a guy had a fight with a director over me. But there was no fight honestly. It was when we were doing ‘Wide Revenge’, where I had my first lead role. I was supposed to play the younger version of someone and my boyfriend at that time said no. It created small rancour but it wasn’t like a fight but the paper turned the story upside down. That was when my mom sat me down and advised me to use cuticle to cover my ears if I love my job.

To make a comeback, it has become a trend for actors to produce their own movies. What are you working on right now?

It’s actually not a bad idea. I am actually tilting towards that side. I have a lot of scripts but I am actually waiting for the right moment. As you can see, movie is not the only thing I do now, I have delved into other things as well. On acting, if I see a good script I will definitely take it. Funny enough, all these while that I have been at home, scripts came once in a while but it’s not what I wanted to do as a comeback. Come on, I have been out of the screen for a while, I mean if I am coming back, it should be something tight, even if it’s not my own movie, it should be something tight.

Talking about my own movie, definitely, but one place I am really looking at is directing. It has always been my passion but for some reasons, I ended up in front of the camera. Now, I think I am more balanced to chase that dream. I am not saying that I am not going to act but will do more of producing and directing.

What would you like to be remembered for in the industry?

So, I believe and I am praying to God that my coming back to the industry is to change lives and not just looking for the money. If it is for the fame, I don’t think I can get more famous than I am now, I don’t know how famous I am anyway. My coming back to the industry is strictly to change lives, not just the people that are watching but also the people that I  am working with. That is what I am hoping for because a whole lot of times, I don’t know if we are blind, we do things but we don’t look at ourselves.

Continue Reading
You may also like...
Related Topics:interview, maureen solomon

6 Interesting Facts About Eniola Badmus
Emeka Okoro: I Was A Womaniser Until I Gave My Life To Christ After I Got Married