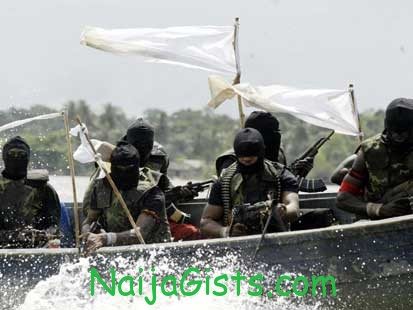 In response to an article on Boko Haram’s Demand For Dialogue, NaijaGists.com just received an email from Comrade Azizi, an official of MEND (Movement For The Emancipation Of the Niger Delta) demanding the release of their leader Henry Okah and withdrawal of troops from the Niger Delta region. naijagists.com

The group warned if Boko Haram‘s demand is granted all the request in the letter below must be granted otherwise, they’ll launch a violent attack.

A copy of the official statement below

Ref: PRESS STATEMENT BY THE MOVEMENT FOR THE EMANCIPATION
OF THE NIGER DELTA (MEND) ON THE RECENT DEMANDS FOR PEACE BY
BOKO HARAM.

We read with great concern reports attributed to one Abu Mohammed Ibn Abdulaziz the spokes person of the sect on the dailies this morning the 2nd of November 2012 outlining conditions to end its campaign of violence against the Federal Government and the citizens alike.

The high command of the Movement for the Emancipation of the Niger Delta wishes to inform the Federal Government and all security agencies in Nigeria that if these conditions given by boko haram are granted without the release of our dear leader (Henry Okah) and other members of our movement, there will be serious consequences which with our latest technological know-how, will affect the entire country including the oil and non oil sectors respectively.

It is regrettable that for the past 52 years of independence, the Federal Government has failed in it’s responsibilities to protect the lives and properties of the Niger Deltans and most importantly, handing over the control of our resources to the region rather the Federal Government finds it appropriate to use the money generated from our resources in developing other regions which we no longer can take.

As a matter of urgency, the Federal Government is here conditioned as follows:

(a) Stop further prosecution of our leader (Henry Okah)
(b) Release all members of the movement held in various detention centers in Nigeria
(c) Compensate families of our members killed by the Government security
agencies.
(d) Withdraw all military personnel and tanks in the region
(e) Handing over resource control to the region.

Consequently we have resolved to launch an aggressive and bloody campaign against all military and oil installations in the whole of the country if these conditions stated above are not granted.