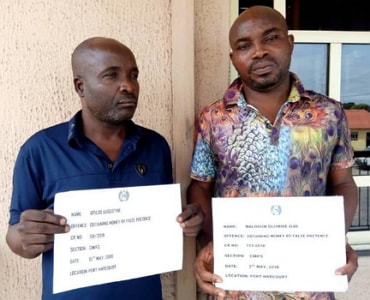 The EFCC  has arrested two suspected fraudsters who operate from their base in Akungba Ondo state.

The suspects; Augustine Opaso and Balogun Olumide were arrested at the reception hall of Presidential hotel in Port Harcourt Rivers state while waiting to collect more money from the victim they defrauded of a whopping N31million.

The suspects placed on surveillance were nabbed after the victim petitioned the EFCC.

They led EFCC operatives to a shrine where special money making prayers were being offered. Several images and spiritual items were recovered from the shrine.

Continue Reading
You may also like...
Related Topics:money medicine, scammers