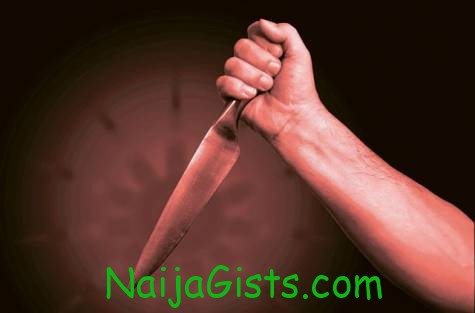 Mr Chimuanya Akurunwa, a newly married man escaped death narrowly in Owerri recently when his wife of only 4 months stabbed him thrice in the chest with a kitchen knife. naijagists.com

As at the time of this report, a team of doctors at the Federal Medical Centre, Owerri, are battling seriously to save the life of the ailing man, who wedded his supposedly heart throb last December at First Baptist Church, Avu.

Further investigations revealed that Akurunwa, a native of Umuocha Avu, Owerri West local government area of Imo State, was stabbed in his sleep and his assailant fled with the kitchen knife she used to perpetrate the act.

It was gathered that trouble started when the man, a staff of the Security Department of Federal University of Technology, Owerri, FUTO, wanted to secure employment for his graduate wife in the institution.

While his wife allegedly opted for where she would be trained at a N30,000 bill, Akurunwa found a place that would charge only N15,000 to achieve the same result within three months and this gradually degenerated into a shouting match between the couple.

Efforts made to reach the Police Public Relations Officer, Mr. Samuel Oodee, for comments on the issue failed.

The love of money is the root of all evil.

It’s obvious this woman plans to use the money for something else.

What a poor man!

We wish him speedy recovery.