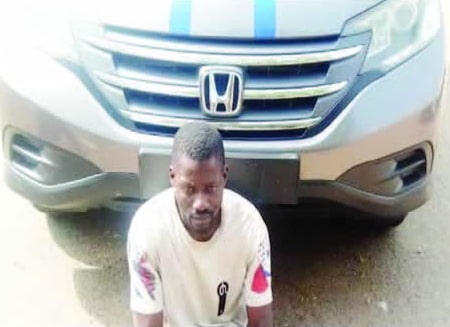 My Step Mother Is A Witch, She Casts A Spell On Me – Man Who Can’t Stop Stealing Confesses In Court

A man identified as Sheriff Lawal, who has served prison terms on four different occasions, on Thursday stunned an audience in the Osun Magistrates’ Court, Osogbo, when he said a spiritualist told him that he was under a spell.

25-year-old Lawal, who was standing trial for stealing a binding machine, was arrested on Wednesday by policemen from Dada Estate Police Station, shortly after he was released from prison for a similar offence.

Appearing before Magistrate R. Olayemi, the accused pleaded guilty to the one count of stealing preferred against him.

While in the dock, the accused was asked why he refused to desist from stealing.

Lawal told the court that he was an orphan and he started stealing when he was young.

He added that he usually returned to his senses after committing the act.

Lawal explained that he used to live with his elder brother in Osogbo, adding that he was sent packing because of the embarrassment his actions caused his brother.

He noted that there was a time he visited an orthodox church where he was told by a spiritualist that the problem was from his father’s younger wife.

The accused pleaded for the mercy of the court and promised to turn a new leaf if pardoned.

The police prosecutor, Assistant Superintendent of Police, Abiodun Fagboyinbo, had earlier told the court that Lawal stole a binding machine belonging to one Mr Ademilua Micheal.

“The offence is contrary to and punishable under Section 390 (a) of the Criminal Code Cap.34 Vol. II Laws of Osun State Nigeria, 2003,” he said.

Olayemi ordered the Investigating Police Officer to look for Lawal’s brother and bring him on the next day of adjournment.

She ordered that the accused be remanded in police custody and adjourned the matter till Monday, April 29, for presentation of facts.

Continue Reading
You may also like...
Related Topics:stepmother, witch