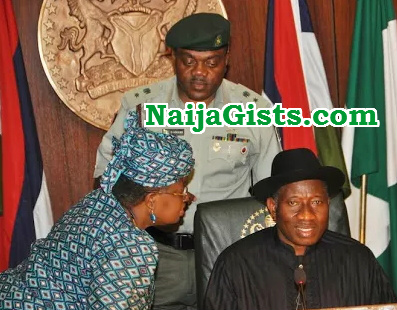 The Federal High Court sitting in Lagos has ordered the Federal Government and former Minister of Finance, Dr. Ngozi Okonjo- Iweala, to provide information on the spending of the alleged missing N30 trillion.

The amount represents some accruable income to the Federal Government during the last four years of the former President Goodluck Jonathan administration. The Socio-Economic Rights and Accountability Project (SERAP) had, through a suit marked FHC/L/CS/196/2015 approached the court over the failure of the defendants to provide information about spending of the alleged missing N30 trillion, which represents some accruable income to the Federal Government in the past four years. The Federal Government under the leadership of Jonathan and Okonjo- Iweala, who served as Minister of Finance and Coordinating Minister for the Economy, were joined as defendants.

The group had hinged its suit on information by a former Governor of the Central Bank of Nigeria (CBN), Charles Soludo, that “at least N30 trillion has either been stolen or unaccounted for, or grossly mismanaged over the last few years under Okonjo- Iweala’s watch.”

Soludo had, in an article entitled “Ngozi Okonjo- Iweala and the Missing Trillions,” stated that the missing trillions cover: oil theft, money that ought to accrue to stock of foreign reserves, unbudgeted oil subsidy payments, customs duty waivers, leakages through the self-financing government parastatals, unremitted sums by NNPC, etc.

“I have a long list, but let me wait for now. I do not want to talk about other ‘black pots’ that impinge on national security. My estimate, Madam, is that probably more than N30 trillion has either been stolen or lost or unaccounted for or simply mismanaged under your watchful eyes in the past four years,” he had stated. The defendants, however, raised preliminary objection as to the jurisdiction of the court, mode of service and the way, which the trial was instituted.

Delivering judgement in the suit, Justice Ibrahim Buba held that Jonathan and Okonjo-Iweala have no legally justifiable reason for refusing to provide SERAP with the information requested for. The court, however, granted all the prayers of the plaintiff.