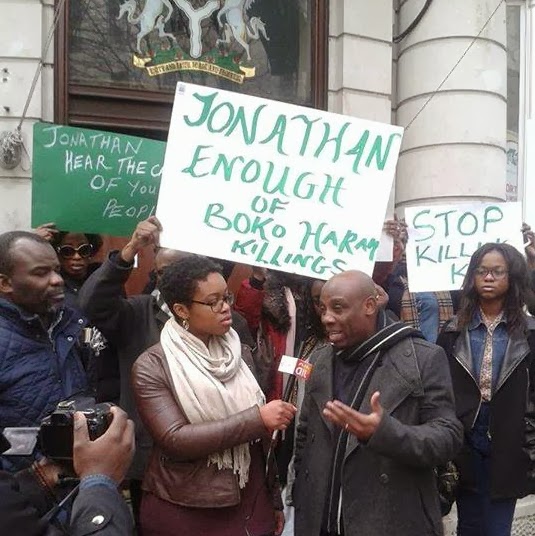 On Saturday some Nigerians living in London organized a peaceful protest at the Nigerian Embassy in Central London to alert lawmakers about the incessant killings being carried out by Boko Haram terrorists on rampage in Northern part of Nigeria.

Yesterday, the group protested Boko Haram’s recent attack that killed 59 students in Buni Yadi Yobe. Beside the execution murder of the 59 males students, 16 females were kidnapped at gunpoint.

Kudos to you guys, I commend your efforts in organizing this peaceful protest.

It is easier to be done from there than from Northern Nigeria isn’t it? Hahahaha Lord have mercy.

Meanwhile as the group were protesting yesterday, the Boko Iranu guys unleashed their terror again at a football viewing centre in Maiduguri killing 52 before moving to a village at night to kill 39 people.

If you haven’t seen it, the Boko Haramists have released a new undated video marching freely with sophisticated weapons that some Nigerian army officials might never have seen in their entire lives of service.

Which way forward Nigeria… Isn’t it time for President Jonathan to ask Oga Obama for help.

May the Lord have mercy on us all.

Here are all the pictures from the peaceful protest that took place yesterday in Central London….