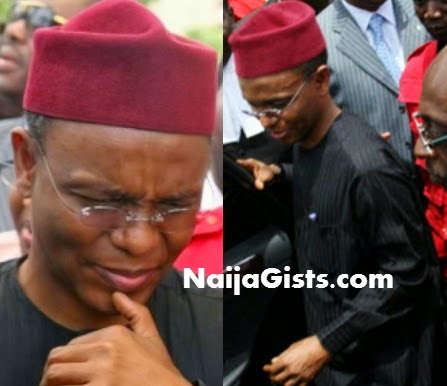 All seems not to be going well for Mallam Nasir El-Rufai as news emanating from Kaduna state has revealed frustrations. Some drama played out yesterday the 2nd of January at the AFAN festival in Kagoro town, Kaduna.

The former minister and governorship aspirant of the APC was seen sneaking out of the event midway. He was obviously responding to the overwhelming show of support for the incumbent governor Mukhtar

Ramalan Yero by the people of Kagoro and Southern Kaduna. Supporters of the former minister were eclipsed by the massive support the PDP enjoyed in the zone.

The mallam had disregarded protocol at his arrival at the event. He arrived long after the Vice President Namadi Sambo and all other top dignitaries were already seated. He refused to acknowledge the presence of other guests and the host of the occasion, the Chief of Kagoro, Mr Ufuwai Bonet.

El rufai and a handful of his supporters were seen driving out of the occasion venue unannounced long before the chief of Kagoro delivered his speech.

The event however continued as the people of Kagoro poured encomiums on the incumbent governor for reinstating the event after it had being suspended in 2012 over security concerns.