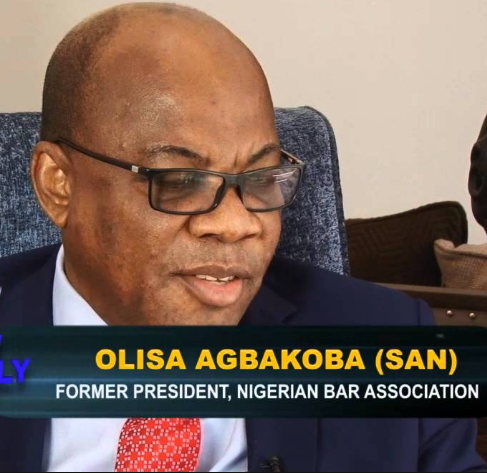 Human Rights Lawyer Mr. Olisa Agbakoba has filed N1trillion fundamental human rights suit against the Federal Government before a Federal High Court for himself and on behalf of the South East Zone over alleged acts of discrimination and under development of the region.

In the suit brought pursuant to section 42 of the 1999 constitution, the erstwhile President of the Nigerian Bar Association (NBA) is further asking the court for an order of perpetual injunction restraining the Federal Government and its agents, servants or privies, or otherwise howsoever from further acts of discrimination against the applicant or any member of the Group/Class represented in the civil action.

Besides, the applicants are also claiming a whopping sum of N1trillion from the Federal Government as general damages to be shared among the five states of the South-East geo-political zone.

Besides the issue of under development, the applicants are further demanding the creation of two more states in the South-East geo political zone to balance with the seven states in the North-West, and thereby bring to an end the discriminatory practices against the South-East geo political Zone in terms of legislative representation, political and judicial appointments and net federal allocation accruing to the geo-political zone.

The suit is also asking the Federal High Court for an order directing the Federal Government to forthwith, “prepare and send to the National Assembly for enactment, a bill to establish the South-East Development Commission (SEDC) and for ancillary matters, which body shall be charged with the execution of the said master plan and the general development of the South-East geo-political zone.”

Other grounds upon which the action was filed is the alleged abandonment of the Niger Bridge to collapse and failure to build the ‘Second Niger Bridge’ making the applicants feel isolated from other parts of 1st Respondent and causing them apprehension about disaster on crossing the existing bridge.

They cited the abandonment of federal roads, which are death traps and robbery baits and occasioning and constraining on the applicants’ grueling road journeys within the geo-political zone as another reason for the suit.

It is their contention that the failure to develop strategic new roads especially the Anam-Nzam federal road linking the South-East with the North-Central at Idah in Kogi State to give the applicants easy access to the northern part of Nigeria is discriminatory.

The grounds of the suit also include failure to exploit the Oil/Gas Reserves in Anambra Basin and stalling the applicants’ legitimate expectation from employment and derivation funds for development of the Applicant’s South-East Zone.

The applicants further cited the abandonment of the Enugu Colliery and depriving them legitimate expectation from employment and derivation funds for the development of the South-East zone as grounds of their action.

In addition, they also pointed out the failure to develop trade-friendly ports and customs policies and establish ‘ease-of-business’ platforms to assist the applicants’ trading brothers and sisters to do better and operate on a higher and modern scale in trading, which makes the applicants to spend money to support relatives.

The suit further raised concern over the failure to have an operational international cargo airport at Owerri to aid trading, which causes the applicants to spend huge sums of money to support trading relatives to haul airborne goods by road from Lagos, with the attendant risks.

The failure to dredge the Lower Niger and establish a Port at Onitsha to aid trading which causes the applicants to spend huge sums of money to support trading relatives to haul seaborne goods by road from Port Harcourt or Lagos, with the attendant risks, has also prompted the action of the applicants.

They also alleged disparity in states structure, which puts the South-East zone behind every other geo-political zone in political and judicial appointments and representation at the National Assembly, as well as in revenue allocation.

Also, foisting low revenue allocation status on the South-East Zone as a result of failure to exploit Oil/Gas and Coal and as a result of the said structural imbalance is adduced as a ground for the suit.

Among other declarations sought, they want the court, to declare that the worsening menace of erosion in the South-East zone generally and in particular in Agulu, Nanka and Obosi in Anambra State, under the watch and neglect of the 1st Respondent, who responds to similar or less-threatening ecological problems in other Zones with dispatch and commitment, is discriminatory and a violation of the fundamental right of the applicant and the Group/Class represented guaranteed under Section 42 of the Constitution of the Federal Republic of Nigeria 1999.

They are also urging the court to make an order directing the 1st Respondent to forthwith prepare and release for immediate execution, a comprehensive South-East Development Master Plan (SEDM) for urgent turn-around of the infrastructure in the South-East geo-political zone, and the phased execution of such master plan to be pursued with dispatch and vigour.