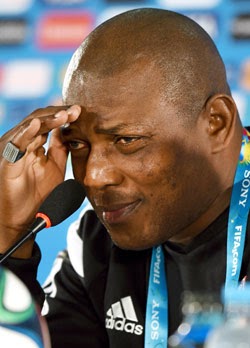 The Nigeria Football Federation (NFF) has written to erst­while Super Eagles head coach, Stephen Keshi, to warn him to either sign the contract document given to him within one week or forget about coaching the team.

The President of the football federation, Mr. Pinnick Amaju, who made the disclosure while updating the Senate Committee on Sports on the situation concerning Keshi’s lingering contract, pointed out that though the federation had given Keshi the contract document to study and get back to them within few days, the Glass House had to write a reminder letter to him last week giving him 10 days to respond or forfeit the contract.

His words: “When I got elected, I went through lots of documents at the federation and found out that coaches are employed without sorting out some issues.

“I therefore ensured that all the committees that have anything to do with the employment of a coach, from the legal to the technical commit­tee of the federation, and because we don’t want is­sues after a coach has been employed, we ensure the contract document given to Keshi is a compendium.

“Again, taking into cog­nizance of the economic realities in the country, it took us a couple of time to finalise the document, however, we want to assure you that it will be sorted out very soon. In terms of finance, we offered him N5 million monthly salary, with some other benefits.

“The contract has been forwarded to him about a week ago although we heard certain things in the media, we however, be­lieve in official correspon­dent with Keshi. Up till this moment I speak with you, we have not received any official response or correspondence from Keshi.

“Since he called to in­form me that he was trav­eling, I directed the secre­tariat on Wednesday last week, to write a reminder letter to him to confirm his decision on the contract within 10 days to enable the team resume camping next (this) week for the two international friendly matches against Bolivia and South Africa.

“I want to assure this distinguished senate com­mittee that within 10 days, we should be able to make a pronouncement on this matter after given him time to study the contract. That is exactly what we are waiting for,” he noted.