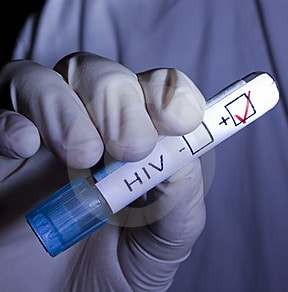 The Minister of Health, Prof. Isaac Adewole, on Thursday said Nigeria had been ranked the 4th country with the highest number of people living with HIV/AIDS.

Adewole disclosed this during the presidential unveiling of the 2018 Nigeria AIDS Indicator and Impact Survey (NAIIS) result at the Banquet Hall of Aso Rock, Presidential villa.

The News Agency of Nigeria (NAN) reports that the goal of the survey was to examine the distribution of HIV disease and commodities in Nigeria and assess the coverage.

Also to ascertain the impact of HIV services on the population level and to measure HIV related risk behaviours using a nationally representative sample.

The survey was conducted within nine months as it commenced June through December 2018 in the 36 states of the federation including the Federal Capital Territory.

Also, it was reported that almost half of people living with HIV in Nigeria achieved viral suppression.

Adewole said this improvement was possible due to the huge committee the present administration had channelled towards the eradication of the disease.

He said that South Africa, India and Mozambique were ranked ahead of Nigeria with the highest number of people living with HIV/AIDS.

According to him, the results of this survey will guide and inform government policies, strategies and programmes on HIV/AIDS and Hepatitis B and C.

“I want to appreciate President Muhammadu Buhari, public and private organisations, the U.S. Government that supported the survey and Nigerians for their cooperation during the survey.

“I want to also seize this opportunity to pay tribute to those who died during the process of the survey.

“From the 1.9 million Nigerians, over 1 million are currently on the live saving treatment,” he said.

Dr Sani Aliyu, the Director-General, National Agency for the Control of AIDS (NACA), said that the generated survey would be taken to state governors who would be advised to latch on it to curb the HIV/AIDS epidemic in their states.

He said the survey was the best in the world because of the non-interference policy employed and the use of better quality laboratories.

According to him, NAIIS is the largest HIV/AIDS specific single country survey ever done in the world which is truly representative of the entire population.

He noted that the U.S had also assisted the organisation in its goal of eradicating AIDS in the country as it supported Nigeria with $70 million to undertake the survey.

“We will ensure that we focus our efforts on ensuring those infected with HIV achieve viral suppression, minimising the risk of HIV transmission and moving Nigeria closer to controlling the HIV epidemic.

“We truly appreciate the effort of organisations which have supported this survey and made it a reality, we look forward to more collaboration to ensure we achieve 2030 target of eradicating the epidemic.

“I appreciate Mr President for adequate funding of the survey which was done in the most efficient manner and it is the largest survey done in nine months.

“Also, we thank the United States of America for assisting us to ensure our goals are achieved,” he said.

Aliyu assured that the survey would provide programme managers and policy makers with a more detailed and specific understanding of HIV epidemic in the country.

He said this would guide the scale up of treatment and prevention services across all age groups.

Mr Michel Sidibe, the Executive Director, Joint United Nations Programme on AIDS (UNAIDS), commended NAIIS for a job well done, noting that the result of the survey will be a game changer for Nigeria.
Follow NaijaGists.com on Facebook and Twitter.