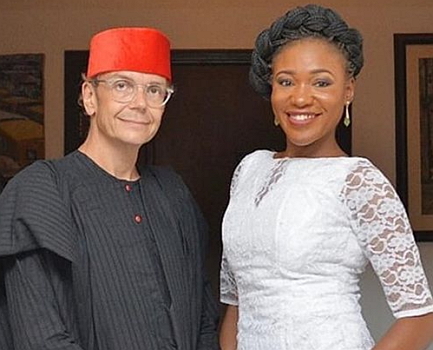 For Nollywood actress and producer Judith Audu, hurdles of interracial marriages have been shrugged away as she recently celebrated her 7th wedding anniversary with her husband Morten Foght.

The actress who is yet to conceive since she married Foght took to social media days ago to gush over her white hubby, saying,

“Its been 10 years of friendship and 7 years of being your wife. Everything about us is a testimony, what we have been through only God knows and we are still standing and growing stronger. Thank you for everything, for believing in me, love you B.” Then she followed the post with several pictures of themselves. Four years ago, when Judith spoke to Potpourri, her convictions about her husband were as they were then as they are today and it would seem nothing has truly changed in terms of affection between the couple.

I would say the chemistry we had when we met for the first time was very strong. We had great laughs together, had intelligent conversations and the friendship built up over time. We dated for three years before we got married.

The attraction for me was the friend I found in him. He understands me and always pushes me to accomplish things I have never thought I could do because he made me learn to leave my comfort zone and set high standards for myself,” she had gushed with the knowing smile of a bride with a vision of matrimonial bliss and it seems it has since stuck”.

On the issue of clash of cultures, Judith has had no untoward experience as it has been roller-coaster of joy as fresh as it was the day they tied the nuptial knots

“It really doesn’t make any difference to me really except he has a white skin and I have a dark skin. It would have been same if I married anyone outside my tribe in Nigeria as we all have different cultures. Adaptation happens naturally.”