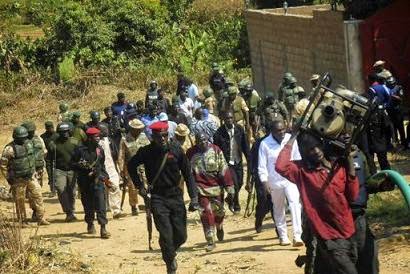 Boko Haram informants in the Nigerian Army have been exposed in this latest raid.

As at today, 10 Army Generals and 5 senior officers in the Nigerian military have been arrested for aiding and leaking secret military information to Boko Haram terrorists who have killed over 500,000 innocent civilians since their attack began few years back.

The suspects in the military, charged with disloyalty have been giving secret information about the army to Boko Haram which includes troop moments and plans and this has resulted in several ambushes that has claimed the lives of many officers in the line of duty.

The disloyal Army Generals have been accused of forcing troops under their command to join Boko Haram as fighters and then melt back into Army ranks with some working as arms suppliers to the terrorists.

Since the abduction of over 234 secondary school students in Chibok, Borno state in April, over 520 civilians have been killed. The latest attack is the 9 worshippers killed during a service in Gwoza Local Government Area of Borno state this past Sunday.