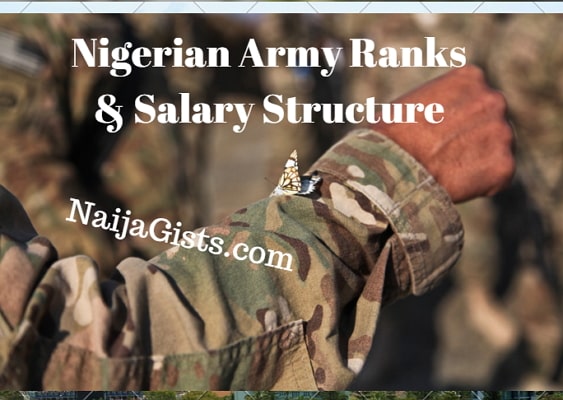 The Nigeria Navy handles all water related battles, and sea combats, while the Nigerian Air Force, as the name implies, handles all the air combats.

The army is the biggest segment of the Nigerian Military Force.

They are in charge of fighting security threats, and insurgencies.

They have been in charge of fighting the boko haram insurgency since it started in 2009, when the Jihadist group created a well mobilized insurrection.

The Nigerian Army was founded in 1960, and has been active ever since. Their headquarter is located at Abuja (FCT), Nigeria.

Today, there are over 200,000 soldiers in the Nigerian Army, and the number keeps growing.

Over the years, they have been involved in several wars and crisis.

The Nigerian Army is currently one of the strongest in Africa today. They have strong soldiers, good fighters, and strategic combat techniques.

Recently, the Nigerian Army launched a huge modernization program. This is to introduce the army to 21st Century weapons, better training, and modern ways to gather information.

Soon, the Nigerian army would be fully ready for the nationwide usage of 21st century tools and weapons.

Like other governmental branches, the Nigerian army has a structure of grading soldiers (ranks), and also have some symbols.

The Logo Of the Nigerian Army.

The logo of the Nigerian army has an eagle with it’s wings spread apart, standing on a six-point star, with an Arabic Inscription beneath.

The entire logo is made of three (3) colours; Red, Black, and Yellow.

Although the eagle is a powerful bird that flies at great altitudes, it has a strong tie with the earth. An eagle has four toes, which is a representation of a solid foundation. As a spirit animal, it watches over us as a guardian.

In the logo of the Nigeria Army, the eagle represents the merciful power of the army.

The star has two colours (black & yellow) interlaced in each of the six points.

This is traced back to 1914. It is a representation of the Northern and Southern protectorates who were united in peace, in order for the nation “Nigeria”, to be created.

This amalgamation was done by the First Governor General of Nigeria, which was Sir Lord Lugard.

Nigeria has continuously maintained this unity despite the fact that it was threatened between 1967 to 1970, during the Nigerian Civil War, also known as the Biafra War.

This war lasted for three whole years and was fought between Nigeria, and the Igbo People who represented Biafra.

The Biafra represented the national aims of the Igbo nation, whose administration thought they would split from Nigeria, as they couldn’t bear staying in a government dominated by the Northerners.

Biafra was led by Chief Chukuemeka Odumegwu Ojukwu. He was a military officer (Lieutenant Colonel in the Nigerian Army, and General in the Biafran Army), and an active politician in Nigeria. He died in 2011, at the age of 78.

Even after the Biafra war, Nigeria maintained her bond.

Origin And Meaning Of Arabic Inscription On The Nigerian Army Logo

The Arabic inscription beneath the six-point star in the logo of the Nigerian Army is their motto.

This is transcribed in english as; “Victory comes from God alone“.

During the creation of the logo in the time of Lugard, the only written language in West Africa, especially between the generally spread hausa traders across the locality, was Arabic.

The Arabic was also used then, for symbols, currencies, and official badges in West Africa.

The inscription has remained untranslated in the logo of the Nigerian Army since then.

The logo of the Nigerian Army has a background of two colours. These are; red and black, aligned vertically like the Nigerian flag.

This is also the flag of the Nigerian Army.

The red colour in the logo represents the foe forces, and their doings.

This is in accordance with the “North Atlantic Treaty Organization” (NATO) military colour code, and they stand for same thing when used anywhere in the military.

The black colour in the logo background according to the military, stands for cavalry which represents soldiers who fought on horse backs, and also represents mechanized troops.

Now you know what the logo of the Nigerian Army means.

It is high time we moved on…

What are the ranks in Nigerian Army?

The ranking structure of the Nigerian army is divided into parts.

The ranks structure for the non-commissioned officers in the Nigerian Army is as follows, in ascending order.

This is represented by a golden eagle above the tripple “V” like shape, and is beginning of being a senior officer.

The symbol for this rank is a golden eagle in a crown of semi-circled olive branches, on a badge, placed on the uniform.

The badge of this rank is the Nigerian Coat of Arm. 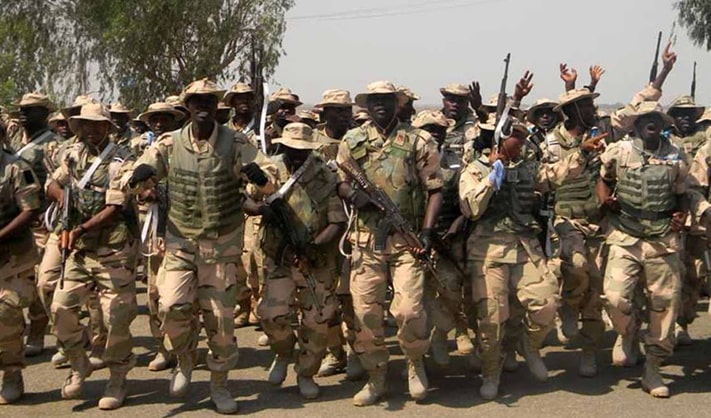 The rank structure for the commissioned officers in the Nigerian Army is as follows, in ascending order.

This is the first rank as a commissioned officer, and the symbol of this rank is a badge on the centre of your chest, with a six-point star.

This is indicated by two six-point stars on a badge on the uniform like the second lieutenant.

This is a widely known rank, and is indicated by a badge on the centre of the chest with three six-point stars.

This rank is identified by an eagle of silver colour, on the badge of the uniform.

The symbol for this rank is an eagle above two six-point start all in silver, on the badge of the uniform.

This rank is identified by  a golden eagle, above three golden triangular arranged six-point stars.

It is identified by an eagle above a crossed sword and baton in form of an “X” shape.

It is identified by a symbol of three elements aligned vertically. The symbol of this rank is an eagle above a six-point star which is above a sword and a baton crossed in “X” shape, and all in black colour.

It is identified by a golden eagle above two golden six-point stars, which all sits above a golden sword and a golden baton crossed in “X” shape.

18: Field Marshal: If you are asking “What is the highest rank in the Army?” Then know now, that it is not the General, but the Field Marshal.

This is the highest rank in the army. Since the creation of the Nigerian Army, no one has attained this rank.

It is less popular due to this, but is the highest rank in the army.

This rank is identified by a golden eagle above a golden sword and baton crossed in “X” shape, with two semi-circled golden olive branches on both sides.

How much is the salary in the Nigerian Army?

The salary arrangement of the Nigerian Army moves in accordance with the ranks, and whether you are a commissioned officer, or not.

Here’s the outline of the Salary of the Non-Commissioned officers in the Nigerian Army, in ascending order.

This is the last salary as a non-commissioned officer.

The salary of the commissioned officers in the Nigerian Army is as follows, in ascending order.

A Lieutenant General in the Nigerian Army receives a monthly salary of #1Million.

This is the highest salary in the Nigerian Army.

I believe you now know much about the Nigerian Army, their ranks, symbols, and salaries.

How to Join Nigerian Air Force & Become a Military Pilot in Nigeria..Requirements, Application Form & Step By Step Guide
How To Identify A Cultist, Cult Members In Nigeria.. Cultism Signs & Symbols To Watch Out For